Looking for something to do on Thursday evenings now that Alive at Five has ended? A brand new outdoor movie series in Albany will start on August 18th with Indiana Jones and the Raiders of the Lost Ark.

Three more awesome films will be shown throughout the series, and local restaurants will have specials going on so attendees can make a dinner and movie out of the event.

Please note: “Up,” originally scheduled for August 11th, has been rescheduled based on weather predictions. The new date to see “Up” is September 8th. 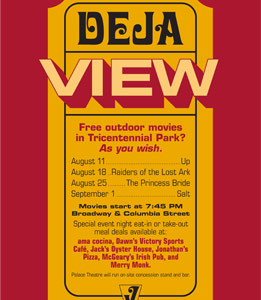 Image provided
The movie series dubbed “Deja View” will happen every Thursday from August 18th through September 8th at 7:45pm in Tricentennial Park.

The lineup is as follows:

Guests are encouraged to bring chairs and blankets with them to view the film.

The movies were chosen by community members, over 600 of whom completed an online survey.

The series was created as a way to emphasize that urban parks are not just somewhere to enjoy lunch during the day, but are also excellent spots for evening events. And, parking after 5pm is free!

Dine in the restaurant, or pick up a meal to bring with you to the park; there will also be an on-site bar and concession stand available, run by the Palace Theatre.

“This pop-up movie series is another positive development in the Downtown entertainment scene, giving people one more thing to do after the work day is over,” Mayor Kathy Sheehan said in a statement.

Prior to this initiative, Tricentennial Park was being used as the temporary location for the popular Alive at Five on Thursday evenings, which had its last show of the season on August 4th – Deja View is now replacing the popular concert series with an exciting movie series on the same night, same location.

In the case of bad weather, the public can check the individual Facebook event pages for each film being shown to look for cancellations or rescheduling.

Deja View is made possible through a collaboration between the Downtown Albany Business Improvement District, Albany Parking Authority, Palace Theatre, and funding in part through the Capitalize Albany Corporation’s Amplify Albany grant program.