Albany, NY has been a chartered city since 1686, but the area’s rich history extends even farther back – early settlers formed communities over 400 years ago! To highlight this history, the Downtown Albany Business Improvement District (BID) will set up 11 interpretive panels all around Downtown Albany, with each one telling a story about Albany’s past. 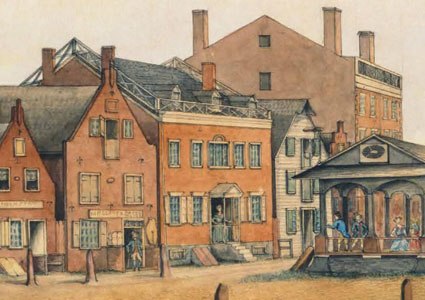 The 11 interpretive panels are a part of the 2016 exhibit titled “Signs of Greatness: Albany Stories.” Once the panels are installed around Downtown Albany, the plan is for them to be a permanent public fixture for residents and visitors to discover.

Together, the panels will showcase the growth of the City of Albany from its history as a small Dutch settlement in the early 1600s through 1664. Many of the panels will focus on Downtown Albany’s settlement and development, trade and industry, and landmark social innovation.

Downtown is renowned for its historic buildings and streetscapes, such as Broadway and State Street, which have been around for centuries. Indeed, one of the 11 panels focuses on Broadway’s original name, Cow Street; it was a popular route for cowmen during the Dutch period.

In a press release, executive director of the Downtown Albany BID Georgette Steffens said, “With the growth of Downtown residential and increase in visitors…this exhibit offers a sense of where our District is today and from where we’ve come.”

Once the public exhibit officially launches on October 17, 2016, the Downtown Albany BID will release an interactive map with the locations of the panels.