For the past three years a sudden richness of redheads has descended on downtown Troy at unpredictable intervals. Next week, Capital Region redheads and those who love them will have another opportunity to gather at Ryan’s Wake Public House in Troy, NY. (Wary blondes and brunettes are already speculating as to what purpose.)

The League of Extraordinary Red Heads will gather again on Tuesday, October 11 for Night of the Walking Red IV. 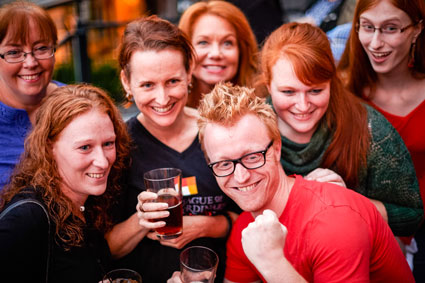 Named to Buzzfeed’s “Best Redhead Gatherings of 2013”, The Night of the Walking Red IV is not to be missed. The League of Extraordinary Red Heads has teamed with Saranac Pumpkin Ale and 2 Gingers Whiskey for this year’s “Toast of the Coppertops”. Representatives from both companies will be there to pour free samples, talk about their product, and distribute free swag (though it should be noted to interested parties that 2 Ginger’s Whiskey swag is expected to be in especially high demand). The evening will also include a fiery sunset group photo on the deck of Ryan’s Wake at 6:15 pm and a performance by local blue grass band, Red Haired Strangers, who will take the stage at 6:45 pm.

It is unclear to local non-gingers whether The League of Extraordinary Red Heads aims only to amuse and entertain or to further a subversive agenda during their Night of the Walking Red IV. Blondes and Brunettes in the Capital Region remain wary of rumors that League meetings focus on two topics only: 1. Us and 2. Them.

In an effort to reassure the non-redheaded public that the League is not using the evening as a front to distract from the secret meeting of a powerful conclave, the event is open to all. In fact, the Night of the Walking Red IV is specifically advertised as “a social gathering for those with reddish hair and those who love them”.

Rumors and conspiracy theories about redheaded plans for world domination still abound in the Capital Region, however. Theories that are supported by the “fact that red heads comprise only 2 percent of the human population, and yet – for scientifically unexplained reasons – their ranks include a disproportionately high number of prominent figures, including world leaders, famous authors, and celebrity actors.”

In an explanation of sorts, founder of the League of Extraordinary Red Heads Duncan Crary commented: “Because we always stand out, redheads can never hide in a crowd or at the back of the classroom. So we learn to have fun under scrutiny. Some people call that being ‘fiery,’ and we do tend to be an excitable bunch. That may be the reason why so many prominent figures in history have had crimson locks.”

As a fake redhead who has yet to successfully infiltrate their ranks, this natural brunette remains skeptical.

The Night of the Walking Red IV is expected to be a very popular event with over 100 attendees. Those planning to attend are encouraged to RSVP on Facebook to help organizers prepare for the crowd (and for successful misdirection from their true purpose?).

Now if you’ll excuse me, I need to go touch up my roots…