The wheels are in motion for the presidential transition of Donald Trump, and over the past few weeks, the President-elect has put together his transition team. Recently, Schenectady native and New York State Congressman Chris Collins was selected to play a major role in Trump’s executive committee. 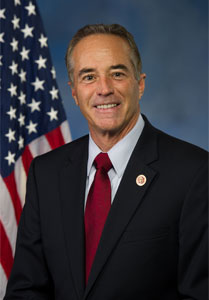 Photo provided
Republican Congressman Chris Collins was born in the City of Schenectady in 1950. Collins’ father originally worked for General Electric in Schenectady, but his job caused his family to move whenever he was stationed elsewhere.

Although Collins previously worked for an engineering company, he eventually found his way into politics. Ever since he won the election in 2012, Collins has represented New York’s 27th Congressional District in the House of Representatives.

Back in February 2016, Collins became the first member of Congress to publicly endorse Trump. He is now ready to play a key role on Trump’s transition team as its Congressional Liaison.

In his role as Congressional Liaison, Collins will continue to work closely with Trump and House Speaker Paul Ryan as a go between. More specifically, he will confer with the Republican Conference membership and relay ideas on legislation, staffing, and concerns to the rest of the transition team.

In a News 10 WHEC article, Collins noted, “I have a very significant role to play but I get to stay New York’s 27th congressman.” As listed on his official website, some of Collins’ core values focus on government that serves taxpayers and local decision making.

Trump is currently searching for the best person to be his Secretary of State. He recently sat down with Mitt Romney, one potential candidate, for dinner to have a private discussion.

However, Romney has been criticized by some of Trump’s allies, including Newt Gingrich, Mike Huckabee, and Rep. Collins. As noted in a Bloomberg Politics article, Collins recently told CNN that Romney was a “self-serving egomaniac” with a “chip on his shoulder,” suggesting he wouldn’t be a good fit for Secretary of State.

As Inauguration day (January 20th, 2017) approaches, the transition team will work to prepare for Trump’s presidency and determine the best path for implementing a new agenda.