Lark Street is one of Albany’s most historic districts, and for many years, it has been a hotspot for small businesses, restaurants, and the arts! In addition to the area being very accessible, business hours aren’t limited, so some places can stay open until 4:00am or for 24 hours. However, the city’s ReZone Albany plan is set to implement new restrictions, which has Lark Street lovers concerned about the district’s future. 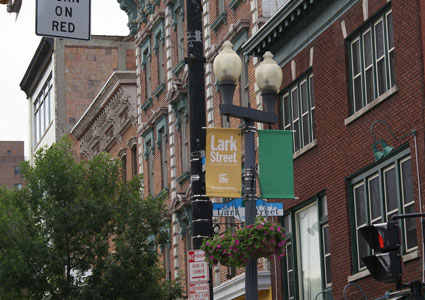 What is ReZone Albany?

Basically, ReZone Albany is an initiative that aims to update and streamline the city’s outdated Zoning Code in favor of a modern Unified Sustainable Development Ordinance (USDO). All current regulations that govern land use in Albany will be transferred into a consolidated document.

The goal of the USDO is to help promote Albany’s economic development and sustainability for the future. As such, some of the updated zoning and administration rules and regulations will affect how Albany’s neighborhoods are governed.

Once implemented, Lark Street would face more changes than most. Under the existing Zoning Code, a Lark Street business must obtain a special permit to stay open for a certain length of time, such as until 4:00am. The USDO calls for a unified process by limiting hours of operation to 2:00am for all of the district’s businesses.

Although this limitation is a way to simplify the process and provide balance to Lark Street as a commercial and residential district, it would also affect businesses that rely on late night offerings, such as coffee shops.

This major change to Lark Street sparked a lot of discussion when the USDO draft was released last year. However, an important revision was recently made to the document.

According to the revision, new Lark Street businesses will have to abide by the 2:00am limit, but established ones will be considered grandfathered in. In other words, if a business can legally stay open for 24 hours, it will be allowed to after the USDO goes into effect. Voting on the USDO draft is expected this year.

This compromise is a huge victory for Lark Street business owners, but the historic district hasn’t been saved completely. The Upstate Artists Guild, renowned for being a haven for the arts and culture scene in Albany, may be forced to relocate from its Lark Street location.

The non-profit volunteer organization has been at 247 Lark Street for 11 years, but a small budget has made staying at its address difficult. Negotiations over a new lease at the site are underway, but nothing is set in stone. A GoFundMe is open for those looking to help.