Slidin’ Dirty began as a food truck and catering service in 2012. Their innovative menu, which includes ingenious takes on street food like burgers and tacos in addition to everyone’s favorite gourmet mac & cheese, quickly earned them fans and followers in the Capital Region. Owners Tim and Brooke Taney opened their first restaurant location in Downtown Troy in 2014 and are looking forward to expanding in Schenectady’s walkable downtown area. 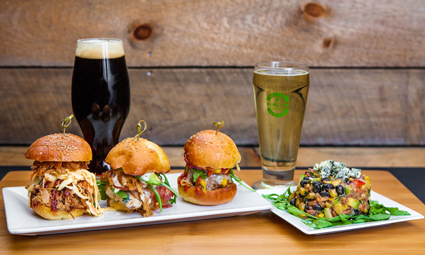 Photo courtesy Slidin’ Dirty
The new Slidin’ Dirty location will seat 110 and take up two floors at 512 State Street, Schenectady NY in the old Foster Building. The 1907 building is being renovated and redeveloped by Sequence Development, who also worked with the Taneys on Slidin’ Dirty’s first brick and mortar location in Troy.

In a press release on their blog, Slidin’ Dirty co-founder Tim Taney said, “Brooke and I are forever grateful for the support we’ve received from our followers in the Capital Region. Being Capital Region natives ourselves, there is no greater honor than to be able to achieve our dream right here in our own backyard. We are also incredibly fortunate for the opportunity afforded us by Sequence Development. Jeff and his team [have] again given us a chance to breathe new life into a historic building in one of the region’s most exciting and emerging areas. We can’t wait to get dirty with the people of Schenectady.”

Just a block down from Proctors, the new Slidin’ Dirty location is ideal for contributing to the continuing redevelopment and revitalization of downtown Schenectady. Jeff Buell, president of Sequence Development said in a statement, “Having worked alongside Tim and Brooke Taney on their first location in Troy three years ago and continuing this partnership here in Schenectady, I could not be more excited to be part of this project. The Foster building’s best asset is its location and Slidin’ Dirty could not have found a better home in Downtown Schenectady.”

Local and state officials are also excited about the restaurant’s planned expansion into Schenectady. “We could not be happier to welcome the Slidin’ Dirty family to our ever growing community of small businesses here in Schenectady. Our city has been witness to an incredible transformation, and helping such a unique and local business expand will only bolster our growth as a city and community,” said Schenectady Mayor Gary McCarthy in a statement.

New York state Senator Jim Tedisco is also looking forward to the new restaurant bringing gourmet sliders, tacos, and mac & cheese to his district. In the press release on the Slidin’ Dirty site, Tedisco said, “Slidin’ Dirty has earned a national reputation as one of the top food truck providers in the nation. We’re excited that Slidin’ Dirty will soon be bringing its great tastes to Schenectady and the 49th New York State Senate District for more people to enjoy.”