Bobbleheads are back! The Tri-City ValleyCats have announced their 2017 bobblehead giveaway days.

Fans will have two chances to get this year’s bobbleheads. The 2017 bobbleheads will honor former Yankee great Ron “Louisiana Lightning” Guidry and the nation’s leading thoroughbred horse trainer (and Mechanicville native) Chad Brown! 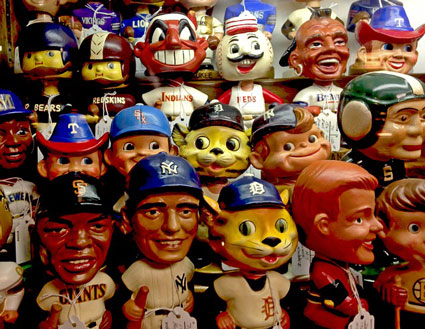 On July 18, the first bobblehead giveaway will honor 2016 Eclipse Award Winner Chad Brown. One of the nation’s leading thoroughbred horse trainers – and a Capital Region native – Brown’s bobblehead is sure to be popular among fans.

Brown won his first race at Saratoga Race Course in 2008 and broke the track record in 2016 with 40 winners. Brown has saddled over 1,000 winning horses, including eight Breeder’s Cup winners.

The second bobblehead giveaway will take place on July 31 and honor Ron Guidry’s famous rehab start for the Albany-Colonie Yankees on July 23, 1986.

Known by the nickname, “Louisiana Lightning”, Guidry played his entire 14-year career with the New York Yankees. A four-time All-Star, two-time World Series champion, Al Cy Young Award-winner, and five-time Gold Glove Award-winner, Guidry is one of baseball’s undisputed greats. Over 14,000 spectators came to witness his 1986 rehab start at Heritage Park in Colonie – the stadium had a seated capacity of 8,000, so this game was standing room only and some fans were even allowed to stand on the warning track of the field!

Individual tickets don’t go on sale until April 3, but you can guarantee yourself a bobblehead with the purchase of a Heritage Series or Uncle Same Mini Plan package! Both ticket packages include 6 of the ValleyCats’ best games of the season. The Heritage Series will attend the July 31 game and the Uncle Sam package includes tickets to the July 18 game.

Opening day will be on Wednesday, June 21 versus the Lowell Spinners.

More information can be found by visiting tcvalleycats.com or calling 518-629-CATS.