The second annual Hannaford MAAC-N-Cheese Fest will celebrate the return of the Metro Atlantic Athletic Conference (MAAC) Men’s and Women’s Basketball Championships to downtown Albany on March 3, 2017 from 4-6:30 p.m. at the Albany Capital Center.

The popular festival includes samples of gourmet mac-n-cheese from a dozen Albany-area restaurants, craft beer, and live entertainment. This year’s MAAC-N-Cheese Fest will be the inaugural event at the brand new, state-of-the-art Albany Capital Center. 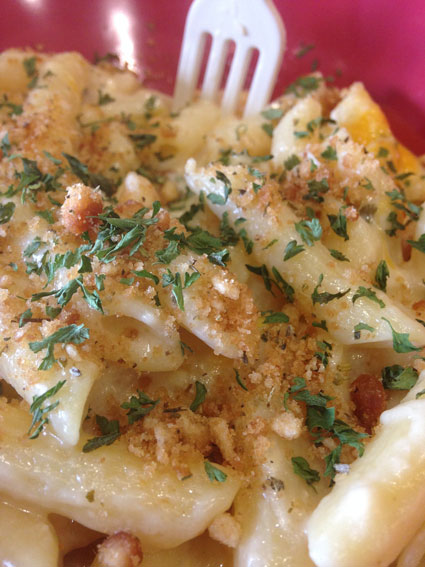 “We were overwhelmed by the community’s response to last year’s first-ever Hannaford MAAC-n-Cheese Fest, and we are delighted to bring the event back to downtown Albany in celebration of the MAAC Basketball Championships,” said Albany County Convention and Visitors Bureau President and CEO Michele Vennard in a statement. “We are honored to serve as the first event for the heralded new Albany Capital Center as it officially opens its doors to the public. The facility is sure to be a tremendous addition to downtown Albany.”

This year’s fest will feature the Air Elite Dunkers, the official dunk team for the NBA’s Atlanta Hawks, Charlotte Hornets, New York Knicks, Orlando Magic, and Toronto Raptors. The team’s high-flying skills will be showcased in two twenty-minute performances during the MAAC-N-Cheese fest and are proudly presented by Pioneer Bank. The Siena men’s basketball court will be relocated from the Times Union Center to the Albany Capital Center for the event.

Other entertainment will include performances by MAAC school pep bands, basketball-themed inflatables, face painting, a balloon artist, and live music.

Tickets are available online for $8 prior to the event and will be $10 at the door. A portion of the proceeds will go to benefit the Times Union Hope Fund, which serves children in need in the Capital Region.

“Hannaford is excited to once again be a part of this outstanding event, which will not only serve as the signature fan attraction of the MAAC Basketball Championships, but also the inauguration of such an anticipated facility in downtown Albany,” said Hannaford Supermarkets Community Relations Specialist Brian Fabre in a statement. “We encourage both basketball and mac-n-cheese fans to join us for a fun evening to kick off the tournament and celebrate the opening of the Albany Capital Center.”

Find other upcoming events in Albany and the Capital Region >>