Fans attending Chris Rock’s April 10 show at the Palace Theatre should be prepared to lock their phones away for the duration of the performance.

Artists have struggled with the distraction of cell phone usage during shows for years. Of course, it is rude to be checking your Instagram while sitting in the third row of a comedy show, but the issue is more than that. Often fans take video of new material and post it online, which gets into sticky issues of copyright infringement and bootlegging. 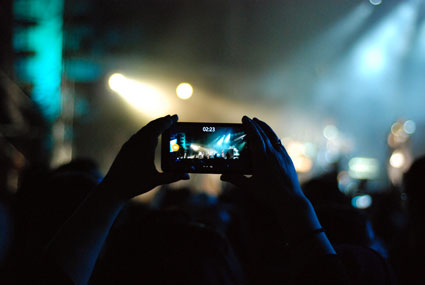 For Chris Rock’s show, the Palace Theatre will be asking show attendees to put their phones in a pouch that locks and makes the phones unavailable for use during the performance. The pouches will still allow attendees to feel the phone’s vibration if they are expecting a call, but they will need to step into the lobby and have the pouch unlocked before they can make their call.

Anyone who tries to use their phone inside the theater during the show will be ejected.

This may seem harsh to a generation that grew up with constantly available technology, but Graham Dugoni who founded Yondr, the company that makes the pouches has a “be here now” philosophy. The pouches are designed to serve a two-fold purpose: keep you in the moment and enjoying the show and protect the artists from potential piracy.

Of course, the technology comes with questions about effectiveness and logistics. Often there are long lines to get into performance venues and impatient crowds ready to go home after the show. Let’s just hope no one forgets to silence their cell phone before they slip it into the locked pouch.

The Daily Gazette: “Phones will be locked away at Chris Rock show”