Check out Matuto, a unique Brazilian group, at The Linda’s Roots Music Festival this weekend! There’s also a wide variety of live music, the last night of Restaurant Week, a nature walk, a couple of breakfasts with the Easter Bunny, and more – however you enjoy spending your weekend, Albany has an event worth attending. 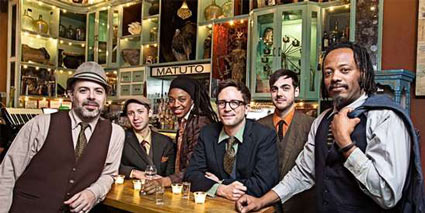 Check out the Roots Music Festival happening at The Linda and see Matuto, a unique group combining Brazilian music and folk – “bluegrass meets Brazil.” Also performing at the festival will be Heavenly Echos, Red Haired Strangers, and The Lazy Suns. Tickets are $15.

The Albany Symphony Orchestra is performing at The Palace Theatre along with Albany Pro Musica. Come out to listen to Beethoven’s Symphony 9 in D minor and see the world premiere of a 25th anniversary commissioned work by George Tsontakis.

Jackson Browne will also be at The Palace the weekend, with some of the most moving songs in popular music that are filled with emotion and honesty. Multi-instrumentalist Greg Leisz will be performing along with Browne.

Yard Sale is performing at the Upper Room in the Pearl Street Pub – this group is a high energy band that covers popular dance tunes from the 1970s to present day. Enjoy brunch and music for $20.

The Albany Institute of History & Art is hosting a fun fundraiser for the museum – the annual Hudson Valley Hops has an Erie Canal theme this year. Come out to sample local craft beers from breweries like The Albany Pump Station and Rare Form Brewing Company, hear from beer historians and brewery experts, and check out an exhibition of artifacts that depict the history of brewing in Albany.

Restaurant Week is coming to an end this Friday, so take advantage of your last chance to get a three-course meal for $20.17 at participating restaurants! The Albany Pump Station, Charter Restaurant at Hilton Albany, City Beer Hall, The Hollow Bar + Kitchen, and Jack’s Oyster House are just some of the great restaurants included in Restaurant Week.

The Watervliet Elks Lodge is hosting the 9th annual Wing War. For $15 you can sample chicken wings from various restaurants in the area – one wing from each establishment – and vote for your favorite. There will also be raffles, a DJ, and a cash bar. Proceeds for this event benefit the Watervliet Civic Center, which provides programs and services for kids.

Friday Walk and Talk at the Pine Bush

While many walks and events at the Albany Pine Bush Preserve are for kids, this one is just for the adults! Get a great start on your weekend by heading over to the Pine Bush for a 1.2-mile hike.

There will be “seed bomb experiments” happening at the community garden on 6th Avenue in Troy. The Collar City Growers and The Sanctuary for Independent Media will be putting together seed bombs which will be distributed on a bike ride for March for Science Albany on April 22nd. Learn about different seed consistencies, forms, and seed mixes, then perhaps use that knowledge to create your own garden at home.

Breakfast with the Easter Bunny

Breakfast with the Easter Bunny

Have breakfast with the Easter Bunny at Dave & Buster’s – there are two different packages to choose from at $19.99 and $24.99. The second package allows for unlimited video game play; both packages include the breakfast, a picture with the bunny, activities, and a $10 power card.

The Normanside Country Club in Delmar is hosting a breakfast with the Easter Bunny along with an Easter Egg Hunt – bring your own basket! There will also be crafts and games, and the kids can have their picture taken with the bunny. The cost is $15 for adults, $13 for kids, and children under three are free.

Have an awesome weekend in Albany! Check out the full events calendar or find other things to do in Albany >>