Good fun for a great cause! On August 15, head over to the Joseph L. Bruno Stadium in Troy for the Slidin’ Dirty Derby, part of the New York-Penn League All-Star Game festivities. Hosted by the Tri-City ValleyCats and local restaurant Slidin’ Dirty, all proceeds from the home run derby will benefit the Michael J. Fox Foundation for Parkinson’s Research. 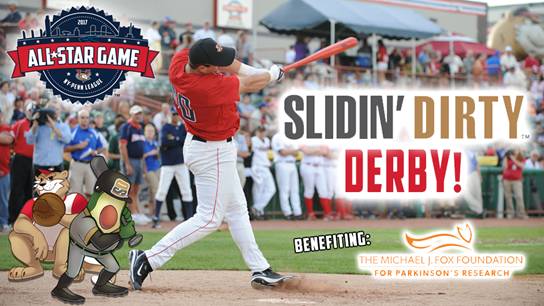 About the Michael J. Fox Foundation

In addition to numerous fundraising opportunities during the game, Slidin’ Dirty will donate $10 towards Parkinson’s research for every home run.

Six of the top home run hitters in the New York-Penn League and Slidin’ Dirty’s John Goodbred will participate in the derby, and one lucky fan will be able to join them! Want to be that lucky fan? Bid for your spot in the derby online.

Guests who have a ticket to the New York-Penn League All-Star Game can purchase on-field passes for the derby. For just $25, stand in the outfield and catch balls that don’t make it over the fence! Only 60 passes are available, so make sure you buy yours ASAP.