Editor’s Note 12/29/17: The New Year Hike at Peebles Island has been postponed from January 1st and thus removed from this roundup. The new date is Sunday, January 7th.

Have you made your New Year’s Eve plans yet? There are so many great events happening in the area, including some kid-friendly celebrations. Check out your options for New Year’s Eve and see what else is going on in and around Albany over the holiday weekend. 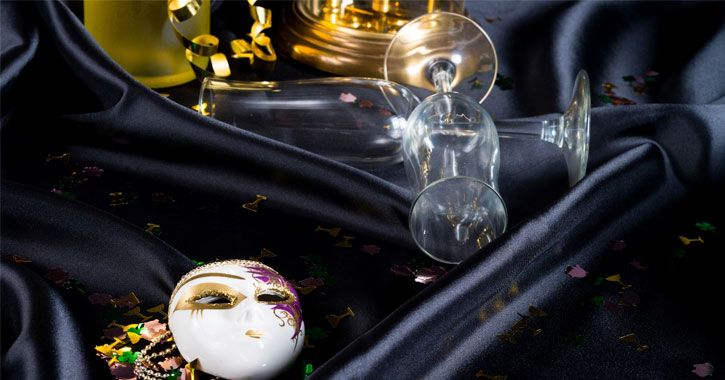 Wear a mask and a gown to this New Year’s Eve celebration! Happening at The Hollow Bar + Kitchen, the Unmasked Masquerade Party consists of several options for open bar packages, dinner, and more. The Late Shift and Mirk will be performing and there will be craft beer specials.

Shipwrecked! at The Desmond Hotel

The Desmond Hotel is putting on a massive pirate-themed New Year’s Eve party with performances from The Audiostars, Skeeter Creek, and Deejay Element; an open bar; an indoor smoking lounge; and much more. Tickets are $145.

Ring in the New Year with some great comedy at Pearl Street Pub with comedians Ray Harrington, James Camacho, and Cody Montanye. You can choose from the dinner and a show package for $55, or just see the show for $18.

Check out all the New Year’s Eve happenings >>

The Children’s Museum of Science & Technology (CMOST) in Troy is hosting their annual Noon Year’s Eve Celebration at two different times during the day. There will be activities, games, face painting, and more. The admission fee to the museum is waived on this day; guests are encouraged to donate to the Science for Every Child initiative.

Ring in the New Year a little early at the New York State Museum with dancing, games, and a magic show.

Celebrate the start of the new year at Mopco in Schenectady with a family-friendly celebration and some improv. Tickets start at $6.

See the Lights Before They’re Gone

It’s your last chance to drive through Washington Park and enjoy the dazzling light displays! The Capital Holiday Lights in the Park will be gone after January 2nd. The cost is $20 per vehicle.

The Albany Pine Bush Preserve is inviting kids ages 10 to 17 to create short films about the Pine Bush featuring wildlife, plants, history, personal experiences, or anything else Pine Bush-themed. Ideas and techniques will be discussed at the workshop. This is a free event.

Your kids can enjoy a selection of children’s books about the suffrage movement and a hands-on Exploration Station at the New York State Museum.