The Albany area food and drink scene is always expanding! We can expect a new restaurant to open in Crossgates this summer, a new restaurant has recently opened in Rotterdam, a taproom is coming to Latham later this month, a craft beer bar has opened in Albany, and a coffee roastery is in the works in Delmar. 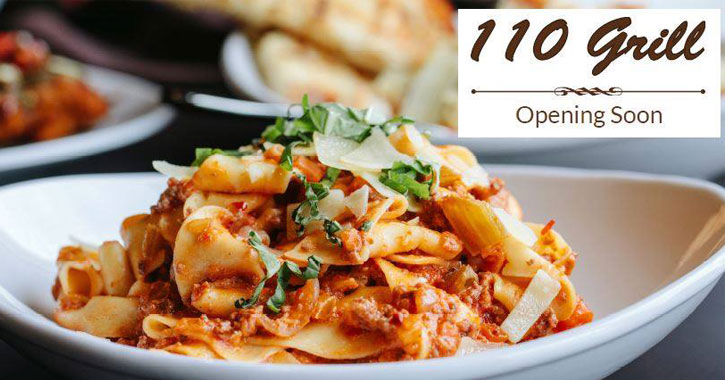 A Fast-Growing American Restaurant at Crossgates

Crossgates continues to grow and thrive! This summer, we can expect 110 Grill to debut at the mall. 110 Grill Restaurant Group is also growing and expanding – this is going to be the 16th location of the restaurant franchise, which has recently opened new locations in Massachusetts and New Hampshire. This will be the first 110 Grill location outside of New England.

110 Grill specializes in seasonal fare with a high emphasis on allergy awareness. In fact, the entire menu is 100% gluten-free.

Signature items on the menu include dishes like Cucumber & Avocado Tuna with sliced Cajun tuna and Bourbon-Marinated Steak Tip served with a whiskey glaze. There will also be signature cocktails, such as the Honey Flower With the Botanist Gin which includes elderflower liqueur, lemon, and honey syrup.

The atmosphere of the restaurant will be casual but upscale, with open kitchens, private dining rooms, large bars, and an outdoor patio with fire pits. They’re aiming for an ideal dining location for any occasion.

110 Grill will be located on the lower level of Crossgates near the FunnyBone Comedy Club.

A New Family Restaurant in Rotterdam

A new family-owned breakfast and lunch establishment has recently opened in Rotterdam. It’s called Roosters NY and it’s owned by the Viscusi family, which is looking to expand from construction to the food business.

The restaurant offers American and Italian fare with fresh ingredients. The owners are looking to build more relationships with area farmers and producers to include as many local ingredients as possible.

“Everything that will come in here will be so fresh we don’t have one freezer in the whole joint,” proprietor Carlo Viscusi told The Daily Gazette.

You can expect inviting breakfast dishes like a farmer’s omelet, with fresh vegetables and choice of cheese, as well as breakfast sandwiches and breakfast burritos. Lunch items offer a twist on classic, high-quality American dishes like burgers, sandwiches, and salads. Italian-style dishes are expected to make their way onto the menu as well.

The dining room has over a dozen tables as well as a long bar over which you can watch all the thrilling action taking place in the kitchen. However, Roosters NY also offers items to go, so you can pop in quickly and get what you need to start your morning.

Roosters NY is located on Hamburg Street in Rotterdam and is occupying a space that was previously an ice cream parlor.

Beer Bones Taproom & Bottle Shop is expected to open in Newton Plaza in Latham later this month. They’ll be taking over the space previously occupied by Connelly’s Diamond Gallery.

The bar is expected to be stocked with 200 beers in cans and bottles, 14 taps for beer and cider, and they’ll also include a few wines and small plates.

This taproom and bottle shop is the brainchild of Rory Regan, Thomas O’Connor, and Ryan and William Conway; Regan currently works at a similar establishment out of the area.

Delaware Supply opened in Albany late last year. The location had previously been occupied by a few different coffee shops, and this new venture offers a similar atmosphere, except with alcohol. You’ll find 12 drafts, a 16oz canner, and beer to go.

The beer bar is located on Delaware Avenue next to Spectrum 8 and New World Bistro Bar.

A Coffee Roastery in Delmar

Have you heard of Barkeater Coffee Roasters? The small batch coffee roaster was a prominent presence at the Delmar Farmers Market, prompting the owner to move his operation from East Greenbush to Delmar last year. The business was expected to do so well owner Stephen Pivonka II received a $12,000 grant from the town to get the venture going.

Barkeater Coffee Roasters is now Brewtus Roasting, and they’re focusing on specialty coffee beans at this new roastery and tasting room. You can find them on Hallwood Road near Curtis Lumber and the post office, and you can also follow them on Facebook to see the progress of the roastery as it comes along.

Discover your next favorite Albany restaurant >>