It’s not going to be such a happy Easter in Albany for a pair of graffiti artists caught defacing the Egg in Empire State Plaza early this morning.

Authorities were notified around 3:30am that there were two people at the plaza with extension ladders, respirators and spray cans painting graffiti on the capital landmark. Although the message they were painting was light-hearted, the two face up to one year in jail for the class A misdemeanor. 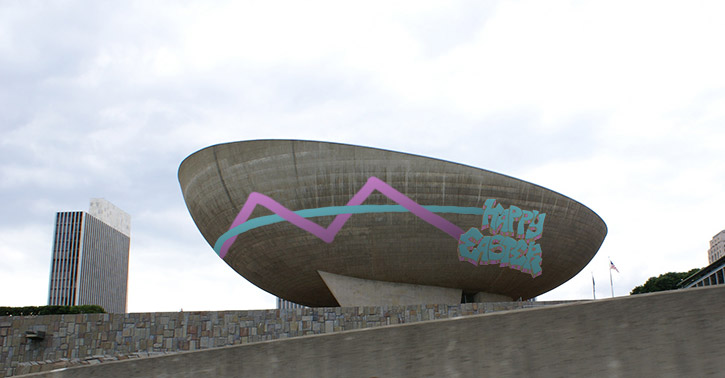 The two “artists” tried to make an escape, but in an effort to salvage the equipment they used, they were apprehended a short distance from the plaza. The damage had been done, and the paint was almost dry by the time they were in cuffs. Early estimates put the easter egg paint job at around $20,000 in damages.

A spokesman for Beautify Upstate New York (BUNY) stated that they would have the artwork down and the egg restored to it’s former finish by early next week.

People, if you’re going to do graffiti, paint your own property – vandalism isn’t cool.