This weekend is a great one for shopping in the Capital Region, with The Collar City Craft Fest taking place in Troy and the Half Moon Market happening in Albany! Check out what else you can look forward to with comedy shows, local sports, and more. 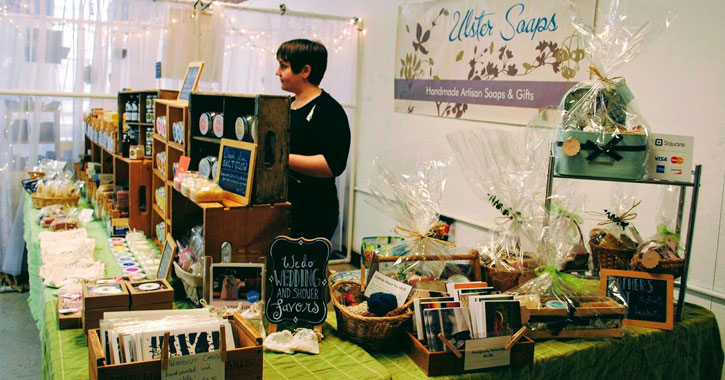 The annual Collar City Craft Fest will be taking place once again at the Arts Center of the Capital Region in Troy. Admission is just $5 and you’ll find a wide selection of talented artisans from all over the Capital Region!

The Half Moon Market

The Half Moon Market is back at the Washington Park Lake House with over 40 local and regional vendors, vintage pop-ups, food trucks, craft beverages, and more. There is a Friday Night Kickoff Party to start the event off with DJ Selector David Normal.

It’s the last Friday of the month, which means Troy Night Out! Enjoy art events, live music, and fine dining in downtown Troy. The theme this month is Earth Day.

Ladies Night Out With Sherry Davey at The Upper Room

Need a good laugh? Head to The Upper Room at Pearl Street Pub on Friday for a special Ladies Night Out with comedian Sherry Davey and special guest Jaye McBride. Sherry Davey has been named one of the Top 10 Comedians in New York City and is known for her many dialects and characters. Admission is $20.

Well known local singer/songwriter/comedian Erin Harkes will be performing at Savoy Taproom on Friday along with comedian Josh Kincade. Come out for some laughs! Tickets are $15.

A full music festival is taking place throughout Albany on Saturday. The mission behind the festival is to give regional talent proper exposure at awesome venues and to provide insight to musicians on how to further their career. In addition to performances at various venues, there will be a Music Industry Panel discussion.

A Cool Event for Kids

The Children’s Museum of Science & Technology (CMOST) in Troy is hosting a special event for National Super Hero Day. They’ll be exploring the secrets behind superheroes and their superpowers. Wear a superhero costume and get free admission for your next visit!

The Albany Knicks Women’s Rugby will be taking on the Village Lions in their first stop on the road to the Nationals. You can check out the game at Dick Green Field in Albany for free.

Have you ever watched a roller derby bout? You’re in for a treat! Check out the Albany All Stars as they face off against Suburbia Roller Derby at the Albany Capital Center. Stick around afterwards for the MVP awards. Tickets are $12 in advance, $15 at the door, and $5 for kids 10 and under.

Run or Walk for a Great Cause

You can run in the Corning Preserve or walk in Washington Park to support Parkinson’s research and local programs in the community. The run is $30, the walk is free.

The 10th Annual Cherry Blossom 5K Race and 1.5M Walk for Hope for ALS will be held rain or shine at the Congregation Gates of Heaven in Schenectady. The cost ranges from $15 to $35, with proceeds benefiting the St. Peter’s ALS Regional Center.

Head to TAP-NY Beer and Food Festival down at Hunter Mountain. Over 120 New York State breweries will be in attendance with over 400 carefully crafted beers – wow! Beer enthusiasts will not want to miss out on this great event.

Discover springtime fun in Albany at the Spring Guide >>