Find out what festival is taking place at the Plaza, which summer concert series are worth checking out, and everything else that’s happening in and around Albany this weekend. From car shows to walking tours and more, there is something for everyone! 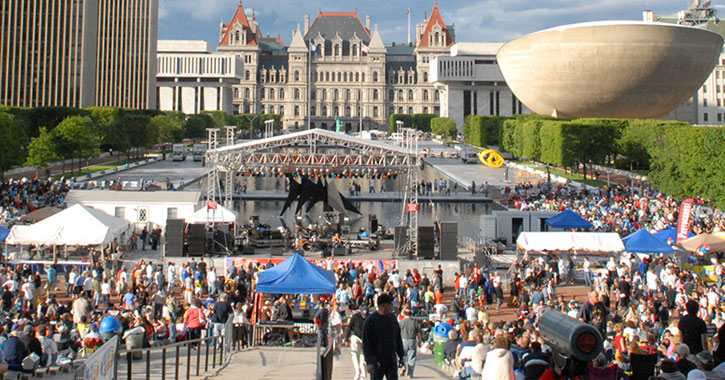 A Fantastic Festival at the Plaza

The Black Arts and Cultural Festival is a celebration of the traditions and cultural contributions of the black community through music, art, and dance and it’s happening at the Empire State Plaza. There will be food vendors, crafts, and performances, including one by R&B star Faith Evans.

The Powers Park Concert Series continues in Troy with the Matt Mirabile Band.

Big Fez & The Surfmatics are performing at Freedom Park in Scotia as part of the Freedom Park summer concert series. They’re considered to be a “beach party band.”

You can catch the Wister Quartet at Freedom Park on Sunday. This is a chance to hear some quality classical music without having to pay symphony prices!

What’s Happening With the ValleyCats

The ‘Cats are paying tribute to World Series Champion Houston Astros at this game. The championship trophy will be featured at the stadium, and there will be fireworks following the game.

You get three events for the price of one at this ValleyCats game! You can cheer on knights as part of Medieval Times, enjoy a craft beer tasting as part of Hops & Hits, and scout groups can take advantage of Scout Night deals.

Time for a Theatrical Performance

How to Succeed in Business Without Really Trying

The hilarious play How to Succeed in Business Without Really Trying is being performed at the Washington Park Playhouse. Reserved seats are between $18 and $25, and lawn seating is free! This performance is going on through August 18th.

Curious about birds and birding? Head to the Albany Pine Bush Preserve on Saturday morning for a free event. The group will be heading out to observe some of the Pine Bush birds, and you’ll get to see their science team in action as they capture and band birds.

Interested in nature photography? Hear some tips from a professional at the Pine Bush. This is a two-hour workshop followed by a one-hour hike around the Pine Bush to try out your new photography skills. Admission is $10.

A car show for cars, trucks, and motorcycles is happening at the Wal-Mart in Amsterdam. It’s $15 to register a show car, there is no cut off year, and they’ll be awarding 25 two-feet tall trophies.

Attention motorcyclists – you can participate in this fun fundraiser for The Bernard & Millie Duker Children Hospital’s Melodies Center at Albany Medical Center. The cost to ride is $20 for a single rider (includes a barbecue), and the ride is happening in Latham.

The Vietnam Veterans of America and the American Infidels Veterans Motorcycle Club are hosting the this car and motorcycle show at the Stratton VA Medical Center. The show is free for spectators, with a $10 suggested donation to register your car, and proceeds are going to help provide care for local hospitalized veterans.

A guided walking tour is taking place at Albany Rural Cemetery, where the group will be checking out the graves of several Civil War soldiers and sailors. The cost is $15.

Want to see cool murals? This guided walking tour in Albany will be observing several public artworks around the city, and some mural artists are joining the tour. Tickets are $25 and the price includes the tour, a beverage voucher, and a mural pin.

Have a delicious brunch in Albany this weekend >>

See all events taking place at the events calendar >>