Albany has been selected as the official host site for a first-of-its-kind event! If you love sports, competitions, and supporting women, you will want to know all about the Aurora Games. Keep reading to find out when and where this dynamic new event is taking place and what we can expect. 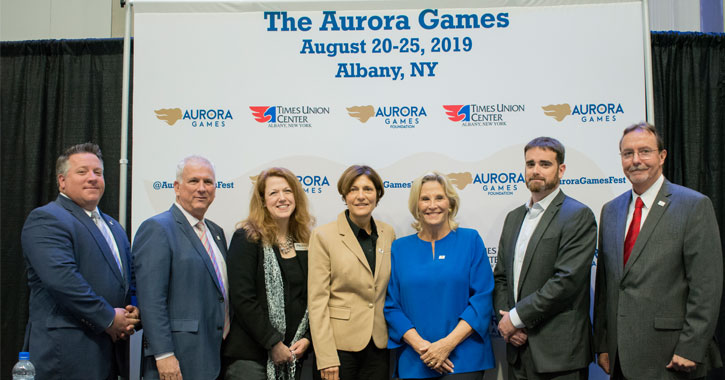 Get the Quick Details

The Aurora Games will be an international, all-women sports competition and festival. It’s happening at the Times Union Center August 20th through the 25th, 2019. Officials are expecting over 50,000 people to be in attendance.

This all-inclusive event will celebrate the best in women’s sports, entertainment, and culture through competitions in basketball, tennis, figure skating, gymnastics, ice hockey, and beach volleyball. All-star athletes, coaches, and trainers representing over 15 countries will be in attendance.

In addition to the competitions, guests can look forward to sports clinics, autograph sessions, seminars, musical performances, and food tastings.

Iconic Athletes on the Advisory Board

Donna de Varona, a two-time Olympic gold medalist, joined the City of Albany earlier this month in the official announcement declaring Albany the host site of the Games. She is serving as a consultant for the Games and is the Chair of the athlete advisory board.

“When I first competed in the Olympics, no one would have considered the idea of an event like the Aurora Games as there were so many obstacles that we were facing,” she said at the announcement. “But through the hard work of so many people we have arrived at a watershed moment for women in and out of sports.”

Over two-dozen sports, entertainment, and business figures have expressed their support for the Aurora Games, and so have local officials.

Albany is Getting Excited for the Games!

US Senator Kirsten Gillibrand is also on board: “As the birthplace of the women’s rights movement, New York has always been a leader in women’s social, political, and economic advancement,” she said in a statement. “Albany is the perfect location for this first-of-its-kind event, which will attract people from all over the world to the Capital Region.”

How to Get Your Tickets

Tickets will go on sale to the general public on Friday, March 8th, 2019 (which is International Women’s Day!). Daily tickets will range from $25 to $150 with full-series tickets available at a discount. You’ll be able to find tickets on Ticketmaster.

However, group sales and VIP experiences can be reserved immediately by calling Alyssa Shane at 201.926.8078.

See you at the Games!