For the sixth consecutive year, the Tri-City ValleyCats will hold National Anthem tryouts with the grand prize being a chance to sing at Joseph L. Bruno Stadium in front of thousands of fans! 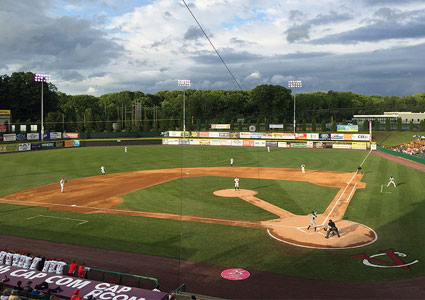 This year’s tryouts will be held on Saturday, April 2 from 10:00 am – 12:30 pm on the lower level of Crossgates Mall adjacent to the Apple Store. Registration will begin promptly at 9:30 am, and 98.3 TRY’s Jaime Roberts will be the guest MC.
Auditions will be conducted on a first-come, first-go basis, and a panel of judges will critique sound quality, stage presence, and song accuracy. Individuals and groups are welcome to try out, but auditions must be performed acapella or with a musical instrument that doesn’t require power.
The top five finalists from the tryouts will have their performances recorded and posted online for fan voting. The performance that receives the highest number of votes will perform on one of the biggest nights of the year at “The Joe,” like Opening Night and/or the 4th of July.
Close to 100 performers auditioned during last year’s tryouts. Will you be one of them this year?