On January 22, Tim and Stephanie Batchler of Schenectady were killed on I-88 in a major car accident. While their son Jon was not in the vehicle, the Batchlers’ other son Jack and twin daughters Abigail and Chloe were injured. To help support the surviving family, Proctors, Albany Broadcasting, and The Comedy Works have started a fundraising drive. 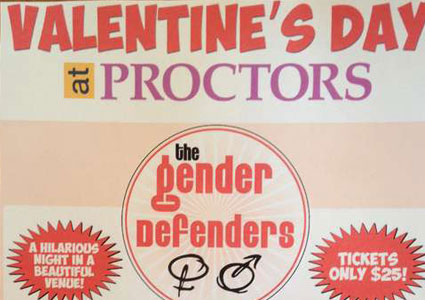 This fundraising drive was recently announced in a press release and on four of the morning shows of Albany Broadcasting. For each ticket sold to Proctors’ “The Gender Defenders” Valentine’s Day comedy show, The Comedy Works, Albany Broadcasting, and Proctors will donate $2.

“The Gender Defenders” will take place on Tuesday, February 14, at Proctors in Schenectady. The show will feature four hilarious comedians, two male and two female, who will discuss their personal views on relationships, love, and life. All four have performed in the best showrooms in the country.
Tickets for this show are $25 per person until February 14. At the door, tickets will be $30 per person. Doors will open at 7:30pm, and the show will begin at 8:00pm.
If you’d like to donate to the Batchler family directly, Joe Whipple, head football coach at Schalmont High School, has set up a GoFundMe page. The page has already raised over $80,000.
See more information about the show >>
Purchase tickets now from the official website >>