Haven’t heard about All Good Bakers in Delmar? Well, you’re one of the few! It’s a community supported bakery (yes, you heard right) that has quite a few delicious baked goods — and vegan! cinnamon buns — using local and organic ingredients at every possible opportunity.
I arrived at the Delmar Farmers Market at about 11 AM; it had opened at 9. 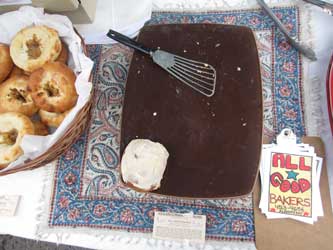 Most of the baked goods at the stand were already gone. When I came back maybe ten minutes later, after taking a stroll around the rest of the farmer’s market, this is what was left of the vegan cinnamon buns. One poor little one for such a big plate.

All Good Bakers is a Community Supported Bakery, meaning the customer pays a certain amount for the year and receives a certain amount of baked goods back – very yummy baked goods! (I unfortunately missed out on trying their scones).The buy-in for shares ends, presumably, when the first shares go out on November 3rd, although the creators of this venture have noted they will not turn people away who are interested in buying shares after that point, it will simply be on a pro-rated basis.
Though I have mentioned the cinnamon buns and the scones, they also bake breads and cake and croissants and bialys and cake and cupcakes (the latter two more special order). Goodness! Lots of good things, all with local ingredients and…honestly, pretty awesome.
I have to give a lot of credit to the creators of this CSB, if nothing else, because they filled my tummy with some yummy deliciousness, but also because the idea behind it is pretty worthwhile, too.
Nick & Britin Foster started selling their goods this past summer, and this venture of theirs is largely a response to the local community who wanted them to stay around (and after trying some of their sweets, I’m not surprised) but wanted to know how they would be around in the winter after the farmer’s market closes. So they decided to do this, a community supported bakery.
Shares range from just over $150 for each week from November through April to almost $500.

Additionally, though non-share members will not be able to go to the pick-up points and buy items individually, the Bakers will be at the Delmar market through December 15 and would be happy to take special orders from non-shareholders.

For more information about location, shares or anything else, you can check out their facebook page, call them at 453.9656, or email them at