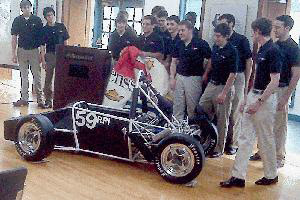 While many college students are sitting in front of their TV, playing racing games in their spare time, a group of students at RPI is actually building a real life racecar.

And this isn’t just any racecar…

Weighing in at 375 pounds and accelerating from 0-60 mph in just 3 seconds, this Formula-style racecar is designed for speed! Just take a minute to stop and think how fast that is. Now imagine being in the driver’s seat!

According to the Approach, an RPI inssider blog, the Rensselaer Formula SAE student club spent “upwards of 10,000 hours collectively designing, making, assembling, and testing the car.” (They don’t mention the amount of money it takes to build something like that. Wonder what it costs!)

So when does it race? Next month, RPI’s 2011 SAE team racecar #59 will face its fierce competition May 11-14, 2011 at the National Formula SAE Competition, which takes place annually at Michigan International Speedway. It will also race again in June at FSAE West at the Auto Club Speedway in California.

Have you ever wanted to design a racecar? …or drive one?