J.B. Shuck, who played for the Tri-City ValleyCats in 2008 was called up to the Houston Astros from AAA Oklahoma City earlier this month. Shuck became the 24th former ValleyCat to reach the big show. He joins 2009 ValleyCats Jose Altuve and J.D. Martinez, who were both called up earlier this summer. 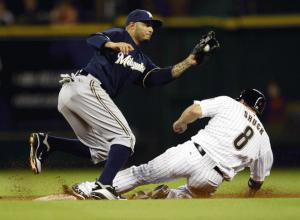 Shuck was drafted in the 6th round out of Ohio State University in 2008. After the draft, he immediately signed with the ‘Cats, and led the team with a .385 on-base percentage (OBP) in his first summer.

The outfielder does not possess substantial power, yet his speed and hitting ability have let him rise through the ranks of the Astros’ affiliates. This was proven in his first major league at bat, when he singled off Milwaukee Brewers’ Yovani Gallardo and proceeded to steal 2nd base.

I wish all the best for J.B. Shuck, and any other ValleyCat that makes his journey from “The Joe” to The Show.