Generally speaking, the beginning is the best place to start any story. That’s where you’re introduced to the main characters, learn the critical details that the rest of the plot builds upon, and begin to be sucked in to the very essence of what the author is trying to portray. But what if something prevented you from starting at the beginning? What if someone ripped out the first chapter and left it to you to fill in the missing pieces as you went along? That is the exact situation that Jen Sawicki has found herself in. Except this isn’t just any story: it’s her life. 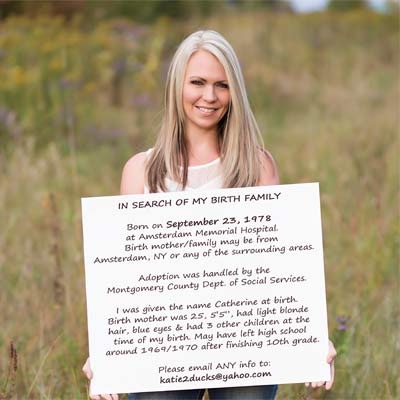 It was at the age of 7 that Jen found out she was adopted. Ever since then, she has been driven to track down the missing pages, to fill in the details of the main characters – her parents, siblings, grandparents – that have been lost through time and the adoption process. “I have ALWAYS wondered who my birth family was,” Jen says. “I have always looked at people in public and wondered if any of them could be my birth mother or other family member.”

Flipping forward a few chapters, you’ll see who Jen is today. A devoted wife and mother of four who loves photography, health and fitness, walking, and, perhaps not surprisingly, genealogy. She would love to be able to make a biological family tree to pass down to her children someday, but is still missing key information that she needs to make that dream a reality.

Jen’s search for her birth family has attracted widespread attention recently through her efforts on social media, but her journey has been far more exhaustive than just one post on Facebook. “I have taken DNA tests with three different websites, including Ancestry.com, and although I have found some probable ancestors, it’s nothing closer than third cousins and it’s very hard to get anywhere with that,” Jen says. “I have also contacted the [adoption] agency, the hospital [where I was born], signed up for any and all adoption registries, looked in local yearbooks from around the time my birth mother was in school, and looked in old newspaper microfilms from the time I was born.” 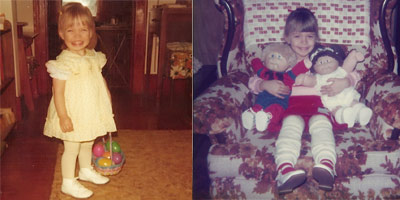 Through it all, Jen has remained realistic about the difficulties that she (and other adopted children and even birth parents) faces as a result of the way information is kept private in the adoption system. “Many people think searching is as simple as asking the agency, asking the hospital, or getting our birth certificate, but this information is kept from us,” Jen reports. “None of the parties are given any information. Not us, not our birth parents, and not our adoptive parents.”

Jen loves her adoptive family, and says they ARE her family, but she can’t fight her “human nature” to want to know her biological roots, ethnic heritage, and the identities of the siblings she knows she has.

Although a positive reunion would be the ideal ending to this beginning-less story, Jen knows that it might not go that way. When faced with people who warn her to ‘expect the worst’, Jen says “I am prepared for anything…the entire purpose of my search is to stop the wondering – to find out about the blank first chapter of my life and finally get to fill it in and move on.”

To help with her search, Jen has provided the following information that she hopes will result in some leads on her birth family: “I was born at Amsterdam Memorial Hospital in Amsterdam, NY on September 23, 1978. My name was Catherine. The [adoption] agency was Montgomery County Department of Social Services in Fonda, NY and the caseworker was Sylvia L. Coppola. The description of my birth mother was that she was 25 at the time of my birth (so born around 1953), 5’5″, light blonde hair, blue eyes, and described as ‘attractive’ and with a ‘pleasant personality.’ She had three children born prior to me. She completed 10th grade in high school, which would mean she may have left school around 1969 or 1970.”

Jen’s search cannot continue without your help. If you have any piece of information that could be of use to Jen, no matter how small, please