Looking for something to make you laugh, cry and quiver in fear within 10 minutes? We may have just found the perfect video to get the job done!A new horror/comedy web series (shot right here in Albany) is to be released October 30, 2014 – just in time for Halloween! 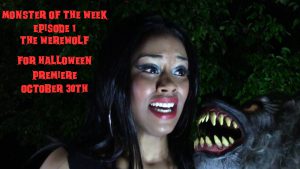 For the past few decades, Ed Rodriguez and Dave Ragone have hosted the Movie Review/Game Show The Media Zone which airs on Albany and Schenectady cable channels. However, their new project (a horror/comedy web series) is releasing just in time to get us in the spirit of the Halloween holiday.

Shot over the past two years, Monster of the Week is a web series shot in and around Albany, featuring locations such as local cemeteries and the wax museum, Dr. Morbid’s Haunted House, in Lake George. Many local actors and actresses were used throughout the web series as both monsters and victims. A make up effects artist from around the area was also brought into the mix to ensure a more realistic feel. 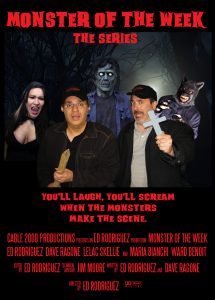 In the series, both Ed and Dave play fictionalized versions of themselves, two late night horror movie hosts, who become involved in a mystery when a series of bizarre murders happen in their town. Once they realize that the murders were committed by various monsters and creatures, they use their knowledge of classic horror films to destroy them.

As web series are usually within 5 to 10 minutes in length (with a cliffhanger mimicking the old serials of the 1940’s), Monster of the Week is sure keep you on the edge of your seat! While there is a good mixture of both comedy and horror, you’re more likely to be covering your eyes than rolling on the floor laughing. They ensure that the comedy never comes at the expense of the classic monsters!

The web series will be released to multiple sites that feature web series content, beginning on October 30th. Six episodes will be released in the first season, featuring three monsters, a werewolf, zombie and the female vampire. Can’t wait much longer? Check out the preview below and make sure to check their Facebook page for updates!

Check out a preview of the Monster of the Week web series!