How many people can actually say that their dream job is in sight? Schenectady resident Richard Vang can, but he needs your help! 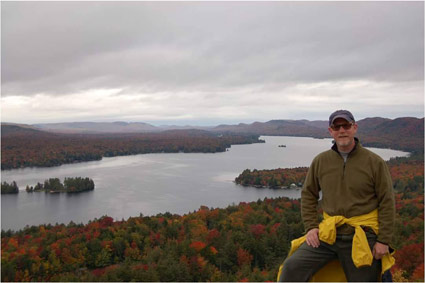 Richard Vang above Fourth Lake, Inlet, NY, Courtesy of Richard Vang
Vang is a contender in a world-wide contest presented by Visit Norway and DreamJobbing.com to secure his Dream Job as a photojournalist in Norway. As part of the contest, the public can vote for their favorite applicant and the 20 applicants with the most votes by April 22 will secure an interview with Visit Norway. Vang is currently #6.

The winner of the contest will spend two weeks this summer touring the Scandinavian country, taking photos, and blogging. The results will be announced on May 7.

Norway holds a special place in Vang’s heart since his grandfather emigrated from there in the early 1900s. The Times Union reported that Vang said, “It’s been a lifelong dream to go to Norway. I think I’m going to reconnect with something in my soul.” In college, Vang studied Scandinavian folklore and language, and celebrated some Norwegian traditions when he was younger.

When he isn’t competing for his dream job, Vang is a Technical Writer for Plug Power in Latham, and also owns and operates Square Circle Press, a book publishing company that focuses on Upstate New York history and culture.

Only 12 days remain to help Vang make it on to the interview round, so be sure to cast your vote now!