Feeling hungry? You will be once you finish reading about three new restaurants that are serving up their delicious cuisines in the capital city! The second location of a popular brewpub, a third incarnation of a local favorite, and a brand new venture for restaurant veterans are all open (or will be soon) in Albany, so loosen your belt buckle and go check them out. 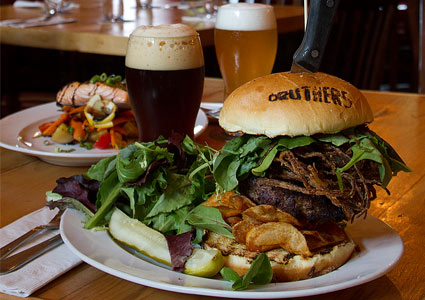 Druthers Brewing Co., a popular brewpub on Broadway in Saratoga Springs that is known for its house-brewed beers and massive crocks of macaroni and cheese, opened the doors of its new 23,000-square-foot space at 1053 Broadway in Albany on Tuesday. The Times Union wrote, “The facility, which is six times larger than the Saratoga Springs original, houses a restaurant, brewery, and has room for a production line to put Druthers’ beers in cans.” While the restaurant will have some of the same favorites everyone loves to order in Saratoga, it will also have some unique dishes, including wood-fired pizzas.

Swifty’s Restaurant & Pub already has locations in Delmar and Utica, but just opened a third venue in Albany last week. Open for lunch, dinner, and late nights, the pub features an extensive draft beer list and is located at 95 Everett Road, the former home of Beff’s pub.

Last, but certainly not least, is Ama Cocina, a casual Mexican- and Spanish-inspired restaurant that will be opening on Sheridan Avenue in mid-June. The Times Union reports that the menu “will include tacos, tortas, ensaladas, tostadas, ceviches, street corn, bowls, fresh seafood, game, fire-roasted hatch green chiles,” and more. Ama Cocina is owned by BM&T Restaurant Group, which operates a number of other bars and restaurants in the Albany area, including Pub 869, The Point, Junior’s, and Spinners.