Yesterday, we filled you in on the latest business news in Albany. With more businesses opening up and relocating to Albany, the need for a convention center has grown. Fortunately for Capital Region businesses, we have one coming our way in the future. The new $66.5 million, 82,000-square-foot convention center that is scheduled to open in January 2017 at Eagle and Howard Street has already booked it’s first customer! 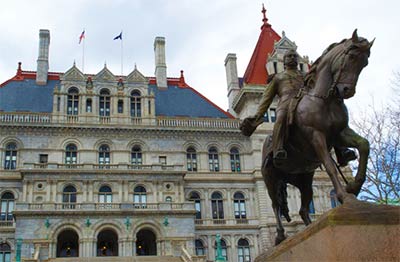 The Empire State Society of Association Executives has booked the Albany Capital Center for June of 2017 to host their annual conference and trade show. ESSAE used to meet at hotels around the Albany area but moved to the Saratoga Springs City Center back in 2003 due to the growth of its trade show. This past year it boasted 111 exhibitors and nearly 400 attendees.

For years, those in support of building a convention center in Albany pointed to ESSAE as the type of organization that caused the state capital to lose business as it did not house a large, modern place to meet and hold functions such as their conference and trade show. The implementation of the Albany Capital Center has already started to solve that problem.

Shannon Licygiewicz, the Albany Capital Center’s sales director stated that in addition to its first booking, there are several other businesses that have asked her to hold dates. She told the Albany Business Review, “The main focus is making sure everyone gets as much information about us as possible. We have weekly construction updates on our Facebook page. I think things are going really well. Interest is strong.”

We are sure that the Albany Capital Center will draw in many businesses to use its facilities. What do you think about the construction of this new convention center?