One unique species of butterfly has been on the federal list of endangered species since 1973, but has recently seen great improvement in our neck of the woods. The Associated Press reports that the Karner blue butterfly has made a comeback in the Albany Pine Bush Preserve, and has quoted conservation director Neil Gifford as saying the population is “robust and healthy.” 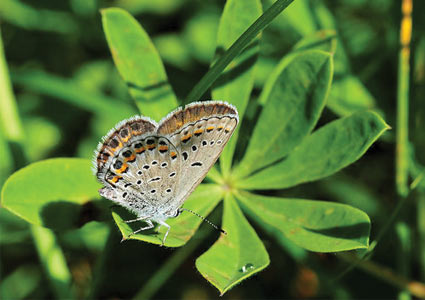 Photo Credit: Karner blue butterfly via photopin (license)
The Karner blue was first discovered in upstate New York by Vladimir Nabokov, a Russian author and butterfly expert, in the 1940s. Its range at that time spanned from New England all the way to Minnesota, but land development and other factors have led to its demise over time.

In fact, the Associated Press cited the U.S. Fish and Wildlife Service as saying, “the Karner blue has declined by 99 percent over the past 100 years, with 90 percent of the decline occurring in the last 15.” These startling statistics have inspired a number of conservation efforts in multiple states.

New Hampshire has initiated a captive breeding program that has helped to grow the species’ numbers. Where there were just 200 Karner blues in 1991, there are now over 14,000.

According to the Associated Press, other recovery efforts “focus on restoring the original pine barrens ecology by removing non-native trees such as black locust, burning the landscape to destroy invasive plants and help fire-dependent species like pitch pine and scrub oak, and planting plenty of blue lupine, the only plant Karner blue larvae eat.”

In addition to New York and New Hampshire, the Karner blue is also making a comeback in parts of Ohio and is holding steady in Wisconsin and Michigan. Unfortunately, recovery efforts in other places, like Indiana, haven’t been as successful.