As I was reading over Billboard‘s report on the Times Union Center’s future $15.7 million renovations, I recalled my own experience of the anecdote they shared.

When I saw that Paul McCartney was coming to Albany on his tour last summer, I was shocked. My mother grew up during the Beatle-mania era but never had the chance to catch McCartney live. Fortunately, that changed last summer due to his Capital Region stop! However, to this day, I am still amazed McCartney, a living music legend, chose to play his only show in the northeast 150 miles north of Manhattan.

McCartney isn’t the only music powerhouse that has added Albany as a tour stop, and the Times Union Center has taken note. 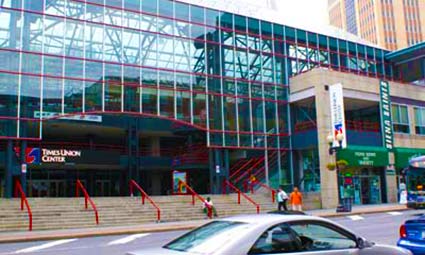 The Times Union Center, which is celebrating its 25th anniversary this year, is operated by international facilities management company, SMG. According to Billboard, SMG reported that nearly 18 million people have attended an array of events at the “TU” with the venue’s annual economic impact at $100 million.

With such an influx in superstar acts, the arena had started to feel dated. Albany County made the decision to spend $15.7 million on renovations to the Times Union Center. The renovations will feature a new facade, and an enclosed outdoor atrium The arena will also attach to the Albany Capital Center. Both projects are expected to be finished by 2016.

Billboard also reported that the Times Union and Capital Center will link to a walkway connected to the The Egg and Empire State Plaza. Albany County officials are hopeful that the renovations will lure NCAA tournaments, as well as more superstar concerts to be held in Albany.

We can’t wait to see the Times Union Center’s renovations! What do you think about the arena’s makeover?

Check out these upcoming events at the Times Union Center!