Project/Object was founded in the mid-1990s by guitarist AndrÃ© Cholmondeley and is the longest running alumni-based Frank Zappa tribute in the world. Their legendary worldwide tours have helped pave the way for a variety of contemporary Zappa tributes, and have hosted more Zappa alumni onstage than anyone other than Zappa himself.

We were lucky enough to get the chance to speak to Denny Walley, one of Zappa’s closest and oldest friends, who will join Project/Object on stage at The Hollow, along with Ike Willis, on Thursday, October 15th. Get the scoop! 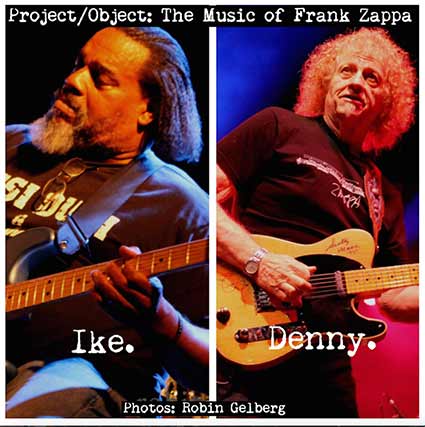 Hi Denny! Could you tell us what your influences were that inspired you to take on a career in music?

My father was a big music fan. He didn’t play any instruments but he played a lot of records. He liked Sons of The Pioneers, country western stuff, as well as some blues records that snuck into his collection. I honestly don’t think he knew he was buying them! Some of the really early stuff was in there.

When I was seven, we were at a friends house and there was an accordion down in the basement where all the kids were relegated when the parents had a cocktail party. I picked it up and just had a natural affinity for it. I was playing it within an hour. I started with that and when I was 13, I was collecting and listening to blues records. I really fell in love with the blues and wanted to get as close as I could to it.

So, that’s how I got started! One thing led to another and by 15 or 16, I started playing guitar and formed a band. We played together for about nine years on the east coast. I had met Frank [Zappa] earlier, we actually went to school together and I was best friends with his brother Bobby. So I was over there at his house almost everyday. We had a long friendship, so when I first auditioned for him it was actually by accident. I never approached him because I figured he might hire me just because I’m his brother’s friend. One day, my friend Jim from MotÃ¶rhead came to my house and said Frank was looking for a guitar player, someone to play slider and Frank asked me to come audition the following day. I went, and I got the gig.

Could you tell me more about Project/Object? How did it all begin?

Project/Object started over 20 years ago. There were previous Frank Zappa tributes 20 years ago, but this was the first to incorporate alumni. Everyone out there playing now has had a light shined on them but are continuing to play music with Andre’s band, Project/Object. I’ve gone out when he has five or six alumni members in the band. We’ve done US tours and European tours. It’s been great.

It’s helping keep the flame alive and he rounds up quality players to come in and play. Ike [Willis] and I are some of the members that have played with Frank for a long time. So yeah, AndrÃ© has been very busy. He’s a tour manager for many other artists. This is the first time in a couple years that he had an open slot to go out with Project/Object again. Getting it together with these guys whether they are all available or somewhat available is kind of tight because everyone is working! But, the flame is burning bright and a lot of guys are out there representing.

Ike was available. I was available. AndrÃ© had this open spot and and he put this together. Our starting date is October 9th and we go until October 25th. We’re playing in about five states. It should be a blast. Our first rehearsal is tonight and I feel like a kid at Christmas! That’s the beautiful thing about this: the excitement and all these years of playing, it’s always just like the first time. It’s a wonderful thing.

What was it like working with Frank? Did you use sheet music or was it more of a jam atmosphere?

There was a lot of homework! Everyone else was a fluent music reader and I wasn’t, so I had to work twice as hard. There was sheet music, so I just learned chord structure and Frank gave me the freedom to hang ornaments. It went well because when I was in the band it was generally when we was doing more rock oriented stuff that was targeted to a younger audience. The orchestral stuff, of course he would use guys who were really excellent and in orchestras, that type of thing. That’s not what I do, that’s why Frank had over 200 people in his band.

So yeah, it was a lot of work but it was like being paid to go to college. It was a fantastic experience and helped me to continue my career in music. Because I had done that since my first band started playing in clubs when we were like 17, I knew that’s what I was going to do. I’ve been fortunate enough to be able to do this throughout my life. It’s a beautiful thing when your passion becomes your job.

What can the audience at The Hollow on October 15th expect? Will you guys play any original music during this tour, or mostly Zappa covers?

There won’t be any original stuff. We are going to do extensive covers, especially from the mid 1960s. It will be a good mix of stuff. We really fine tuned our show about a week and a half ago, and there is some killer stuff in there. I hope everyone did their homework as we will keep everyone on their toes! The fans are seasoned vets.

Besides Project/Object, what have you been up to musically?

Well, I played with Captain Beefheart, but he passed away about four or five years ago. John France is the original drummer and he decided to put The Magic Band back together, so I’ve been doing that for 13 years. I just left the band last year to pursue some of my own things and also just to have the freedom to do so. One thing about Project/Object, is that AndrÃ© is in Asheville, North Carolina and has a lot of music friends and brings a lot of people together. He has aided me in that, as well. I’ve been writing, I have a CD that I’m working on. That will be out in April before I do the tour in the UK.

I’ve been playing a lot of Beefheart’s and Zappa’s music and I’ve been wondering what can I do? I’m just branching out from the stuff I really enjoy playing.

Have you ever been to the Albany area? What are you most looking forward to?

Yeah, I’ve been to Albany! I played there with Zappa somewhere in the 1970s. I lived in New York a good part of my life. I was raised up in Brooklyn but I’m familiar with New York and the upstate area and Albany. I haven’t been to Albany in awhile and I am so excited! I checked out the clubs to get the vibe and The Hollow look great.

We just can’t wait to hit the stage and melt some faces. The response has been really wonderful on the webpage and a lot of folks are coming out of the woodwork to see us. I’m here to do rehearsal today at six and I think we’ll all discover what we forgot to pack. I’m confident I have everything but that will be revealed tonight. I have the spirit though, and I think that counts for something! I’ll be grinning and winning. Bring your friends and bring your enemies on the 15th, because they’ll be your friends after.