After a 17-year-old fell to her death last year at the Plotter Kill Preserve in Schenectady County – the most tragic in a series of recent accidents at the popular hiking spot – local officials have responded to requests for safety improvements. 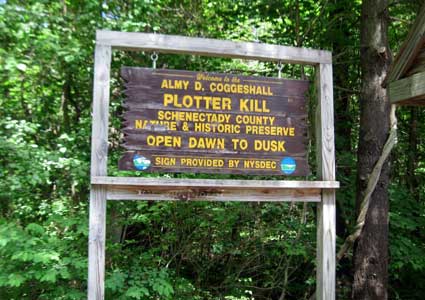 The Plotter Kill Preserve is receiving a total of $600,000 to improve safety and trail accessibility for visitors. Assemblyman Angelo Santabarbara, D-Rotterdam, secured $350,000 in the state budget to be combined with an additional $250,000 through a state grant for the renovations.

On May 12th of last year 17-year-old Carly Sinnott of Clifton Park was hiking off-trail down a wet path forged by previous hikers when she slipped and fell 50 feet to her death – this was despite wearing proper hiking gear. Her parents have been working with local officials ever since to ensure this doesn’t happen to somebody else.

“A tragedy occurred here but something good has come out of that. It doesn’t minimize the loss but maybe it will help prevent future tragedies,” Schenectady County Sheriff Dominic Dagostino said at a press conference.

Improvements to the area will include creation of an ADA accessible trail, the addition of viewing platforms, the stabilization of pathways, anchors along the falls, and increased directional and safety signage. The renovations are expected to start soon and will happen in phases, with the signage coming first.

While the one hiker falling to her death prompted the funding for these changes, it was certainly not an isolated event. In 2011, a 20-year-old was seriously injured near a waterfall. In 2014, a woman suffered head injuries when she fell over a waterfall. And, just three months after Sinnott’s death, another person experienced injuries as well.

The Plotter Kill Preserve may not be a difficult hike in terms of the length and terrain of the designated trails, but hikers are prone to wandering off-trail and putting themselves in dangerous situations. Numbered signs were put in place to combat this problem in 2014, but hikers still comment on websites like LocalHikes.com and AllTrails.com complaining about getting lost.

Why do hikers go off-trail? It’s not only due to poorly marked trails, with visitors of the preserve legitimately getting lost. It’s also because there are three waterfalls that hikers can’t currently view from an official trail – two 40-foot tall waterfalls, and one 60-foot. When attempting to access the waterfalls, hikers can encounter steep, narrow, and dangerous paths.

Seeing the waterfalls is often what attracts hikers to the preserve in the first place, making it somewhat puzzling they have not been safely accessible before. Now they will be, and hikers and waterfall-seekers can rejoice. The observation platforms that will be installed to view these spectacular waterfalls were suggested by Sinnott’s parents.

“The most urgent issue. . .is to create a more user-friendly and safe means to appreciate the falls by providing viewing areas and access to the base of the falls,” Jim Sinnott said during a press conference.

“Ultimately these improvements will mean a more interactive park that informs visitors of their surroundings and where they are in the park,” Santabarbara added at the press conference.