Steven Brundage (aka The Rubik’s Cube Magician) will help 99.5 The River Combat Cancer alongside special musical guest The Rua at Lucky Strike Social on Wed, October 19 at 6 pm in Crossgates Mall. 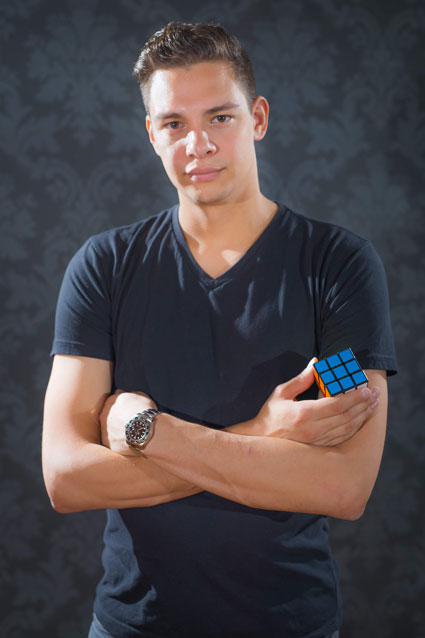 Brundage captivated the nation – and the nation’s most famous critic, Simon Cowell – with his Rubik’s Cube magic on America’s Got Talent this past August. This Wednesday is the Capital Region’s chance to see Brundage perform live to raise awareness and benefit a great cause – Susan G. Komen of Northeastern New York.

Brundage, who originally went viral for getting out of a traffic ticket with a magic trick, was precipitously eliminated by the AGT judges prior to the quarter finals. But a fan outcry and Change.org petition convinced Simon Cowell and Howie Mandell to bring Brundage back as a wild card contestant.

Brundage, of course, did not disappoint, wowing the judges and America with his never-before-seen tricks.

After Brundage’s wild card performance for AGT, the indomitable Simon Cowell admitted that the judges had been too hasty to eliminate the magician from the show. “I’m so happy that myself and Howie actually listened to the public [and brought you back],” said Cowell. “That was an incredible piece of magic, once again.”

Experience the magic of Brundage’s Rubik’s Cube tricks for yourself and donate to a good cause this Wednesday, Oct 19 at Lucky Strike in Crossgates Mall. All net proceeds will benefit Susan G. Komen of Northeastern New York.