We urge everyone to contact individual businesses to confirm their hours of operation before visiting, while we flatten the curve through social distancing.
Guide to Albany's Capital Region
Enter Giveaways Advertise
Home  »  Community  »  Unattractive First Prize Plant in Albany to be Transformed

You’ve probably seen the eyesore that is Tobin’s First Prize Plant while driving on I-90. The former meatpacking plant has been closed since 1981, and yet still the deteriorating building stands. After numerous attempts to revitalize the property, a viable project is now in the works. 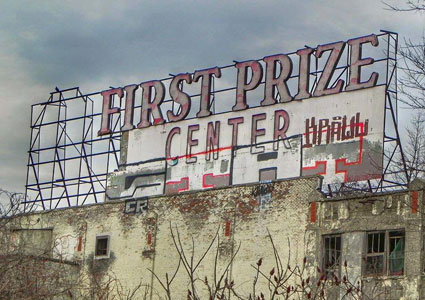 Photo courtesy of Northeastern Abandoned Exploration
Richbell Capital has recently announced plans to transform the First Prize Plant into a multi-use property to include residential housing, retail shops, restaurants, and entertainment; the company is also looking to create a walkable community.

“We are excited about this project, not just bringing life back to this long derelict site but also about the vast employment opportunities it will provide the area,” the Albany Business Review reports Toby MildÃ©, President of Richbell Capital, saying in a statement.

Turning the First Prize Plant around has been a challenge over the past several decades. There have been many redevelopment plans that didn’t end up working out. Wal-Mart, Lowe’s, Whole Foods, and Cabela’s had all put in proposals at various points, and it was also considered for a nursing home, a mall, a warehouse park, and a casino.

Additionally, the location of the plant makes creating a new business problematic – it’s right on the border between Albany and Colonie. There must be special zoning districts adopted for trans-border properties, which will then be managed by a planning board. Both Albany and Colonie officials must be on board with this special zoning in order for the project to work. However, if anyone can achieve this feat, it’s Richbell Capital.

Richbell Capital is the driving force behind the major revitalization of the Adelphi Hotel in Saratoga, which is set to reopen this May. The Adelphi is considered to be the last remaining Victorian hotel in Saratoga; the company certainly has experience with bringing older pieces of property back to life in a big way.