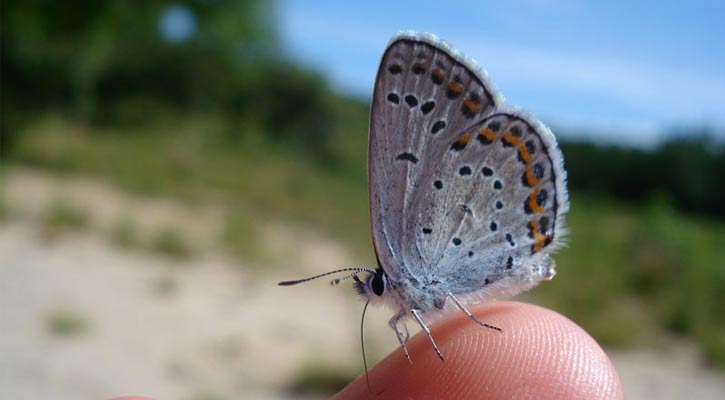 The Albany Pine Bush Preserve has brought the Karner blue one step closer to recovery in this state: the endangered butterfly has exceeded the federal recovery threshold! Twenty-five years after being listed as a federally endangered species, the Pine Bush has officially declared that the butterfly has exceeded recovery goals for the local population. This incredible comeback has been the result of a collaboration between the Pine Bush Commission, US Fish and Wildlife, and NYS DEC.

Through conversation efforts, controlled burning, restoration seeding, and more the Pine Bush has worked tirelessly for many years to protect not only the Karner blue, but dozens of other animal and plant species. In fact, there are 45 different species of Greatest Conservation Need and more than 20 at-risk species within the Pine Bush property.

“The Albany Pine Bush partners have shown that recovery is possible for the endangered Karner blue butterfly,” Wendi Weber, USFWS Northeast Regional Director, said in a statement. “By managing the barrens for the endangered butterfly, the Commission is bringing along many other types of rare wildlife, including the at-risk spotted turtle, wood turtle, and frosted elfin butterfly.”

The Wilton Wildlife Preserve & Park in Gansevoort also provides a home for the Karner blue – Wilton Wildlife and the Pine Bush are two of very few places in the state where this butterfly still exists.

About the Karner Blue Butterfly

The Karner blue is only about the size of a quarter. The butterfly was first discovered in the 1940s by writer Vladimir Nabokov (author of the controversial novel Lolita) in Karner, New York, a hamlet of Colonie. When first labeled as endangered 25 years ago, the rangewide population had declined by up to 99%.

Karner blues depend heavily on lupine, a plant with bluish purple flowers, which they feed on during their caterpillar stage. The Pine Bush relies on volunteer Certified Seed Collectors to collect lupine seed and seeds of other important plants every year for restoration efforts.

Further recovery goals must be met throughout New York State and in other states in order to officially remove the Karner blue from the endangered species list.

Find out more about the Albany Pine Bush Preserve >>