Get excited, baseball fans! Rosters for the New York-Penn League All-Star Game have finally been released. Here’s your 4-1-1 on who’s playing August 15. 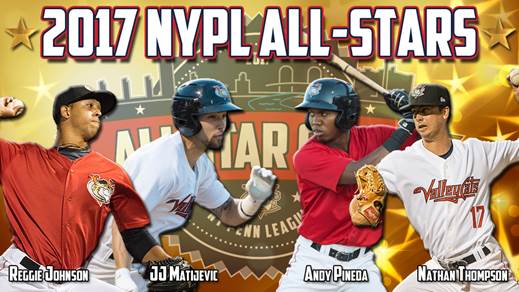 On the North team, four ValleyCats players are being welcomed to their first professional all-star games! The impressive line-up includes pitchers Reggie Johnson and Nathan Thompson, and outfielders J.J. Matijevic and Andy Pineda.

23-year-old Johnson was originally signed in 2016 as an undrafted free agent from Hampden-Sydney College. Exclusively operating as a reliever, Johnson is 5-0 with a 1.69 ERA in 12 appearances this year. He has held opposing batters to a .151 batting average, striking out 28 in 21.1 innings!

Born in Santa Ynez, California, 23-year-old Thompson was selected in the 27th round of the 2016 MLB Draft out of Oklahoma Baptist University. With 32 innings pitched and 43 strikeouts, he leads the team from the bullpen and has held opposing batters to a .214 batting average. Thompson is 0-0 with a 1.41 ERA in 10 appearances.

Selected from the University of Arizona in the Competitive Balance B portion of the 2nd round by the Houston Astros, 21-year-old Matijevic leads his team with 10 doubles. He has spent the season patrolling left field, mostly hitting in the second spot of the batting order. The outfielder is hitting .261 with four home runs and 23 RBIs.

Born in Azua, Dominican Republic, 20-year-old Pineda was signed as an international free agent in 2014. Manning center and right field, Pineda hits .242 with 11 RBIs. This year, he has stolen 13 bases and recorded two outfield assists.

Other Players to Watch

Don’t miss the festivities! On August 14 at 5:30 p.m., come to the free All-Star Fan Fest concert, featuring the Eli Young Band at Riverfront Park. And before the game on the 15th, attend an autograph session and the Slidin’ Dirty Derby! Learn more »