If you’re a basketball fan, then the following statement won’t sound like a lot of hot air:  The Albany Patroons were one of the greatest hoops franchises in sports history.

No, they weren’t Michael Jordan’s Chicago Bulls with six NBA titles, or the L.A. Lakers with Kareem Abdul-Jabbar and Magic Johnson or with Shaq and Kobe. They weren’t the Celtics with Larry Bird, Robert Parrish and Kevin McHale. They aren’t the North Carolina Tar Heels with decades of success or the Duke Blue Devils. 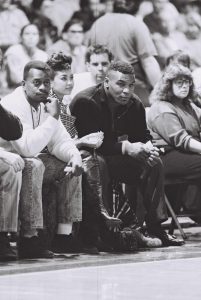 But in the annals of basketball history, the Albany Patroons of the Continental Basketball Association strung together a 10-year reign between 1982 and 1992 that saw some of the best basketball coaches to ever pace the hardwood — Phil Jackson, George Karl, Rick Carlisle, Scotty Brooks and Bill Musselman — squeeze out incredible performances from stellar players like Michael Ray Richardson, Sidney Lowe and Mario Elie.

The 1988 Patroons under Bill Musselman ran up a 48-6 record, the best mark ever in the NBA or CBA.

In those days, the Albany Armony was en fuego, and the sports world took notice of the Patroons. Mike Tyson, pictured left, was in his heyday, and sat court side. ESPN brought its cameras and put the Patroons on national TV.

To memorialize this franchise, and stir some magic memories of the days when minor league basketball in Albany was a huge success, a new documentary is set to be released. “The Minor League Mecca” will debut at the historic Palace Theatre in downtown Albany on Saturday, September 22 at 7:30 p.m. It’s free, although $5 donations are being asked to benefit Siena College Athletics.

The documentary was produced by Upside Collective, a local marketing firm, and features footage of the team at its pinnacle as well as interviews with former Patroons coaches. And there are few coaches in history with the success of Phil Jackson, who went on to coach Jordan and the Bulls and later Shaquille O’Neal and Kobe Bryant with the Lakers to all those NBA championships.

“The Albany Patroons was a launching place for my coaching career,” said Jackson, who won his first championship ring with the 1984 Patroons, adding:  “We had some championship runs and really good times in the old Armory. The premiere of The Minor League Mecca should be a fun time to revisit those years of the Albany Patroons.”

George Karl is one of the most creative coaches and a terrific storyteller — all of which aims to make this documentary a real barn burner. Better yet, Karl will be at the Palace Theatre for this debut — and anyone who loves basketball probably won’t want to miss out on Karl’s appearance.

Karl, who coached the Patroons from 1989-1991, will be a guest at a VIP event prior to the screening, and he’ll answer questions after the movie. The tickets for pre-screening event are $125, but it may be worth it. Proceeds will benefit the Capital District YMCA, and, with his stints with the Cleveland Cavaliers, Golden State Warriors, Seattle Sonics and Denver Nuggets, Karl delivers major bang for the buck when it comes to hoops history — and humor.

“The Minor League Mecca will take the audience on a journey chronicling the untold story of the quick rise and success of the Patroons and the team’s legacy, which continues to shape the world of professional basketball,” said Upside Collective President Brendan Casey.

“As the leading franchise in the Continental Basketball Association, the Albany Patroons left an indelible mark on the city of Albany, the CBA and the NBA. We are excited to give the community an inside look into the success of one of the greatest franchises to ever play in the Capital Region.”

The History of the Patroons

The Patroons entered the CBA as an expansion franchise in the 1982–83 season and quickly captured their first league championship in 1984.

In 1988, the Patroons won a second championship, this time under Bill Musselman who would later coach the Minnesota Timberwolves.

Despite eventually coaching at the highest level, Musselman’s son Eric said his father’s experience in Albany was his career standout. In fact, many consider Musselman’s 1988 Patroons the best minor league sports team in history for their talent and success.

“My dad always felt his time in Albany was the most fun and rewarding time he’d ever had coaching,” said Eric Musselman, men’s basketball head coach at the University of Nevada. “He truly believed that the Patroons would go undefeated that year and to this day that is probably the greatest minor league team in the history of the league. That team would have found a way to beat two or three NBA teams.”

Patroons Documentary Producer Says: This Film Had to Be Made

Casey, an avid fan of basketball who attended Patroons and Siena games with his father, said the documentary production started in 2015 as bit of local history preservation. Before long, this labor of love mushroomed into a full-scale documentary including some of the biggest names in Patroons’ history.

Jackson, Karl, Carlisle, Brooks and many others were eager to relive their times in Albany and tell how the Patroons’ rocket success was a testing ground for their own professional careers.

“It was crazy to me that this story had never been documented,” Casey said. “These guys are legendary coaches and huge personalities but at the end of the day all of them shared great memories about the city of Albany and what this franchise allowed them to accomplish. This was a moment in minor league sports that could never be replicated.”

On that score, Casey is correct. Lace up your high-tops and get ready to watch. The story of the Patroons is one for the sports’ ages.

Looking for a new sports team to follow and cheer on? Here are some local favorites>>>