We urge everyone to contact individual businesses to confirm their hours of operation before visiting, while we flatten the curve through social distancing.
Home / News / NY Times Spoof 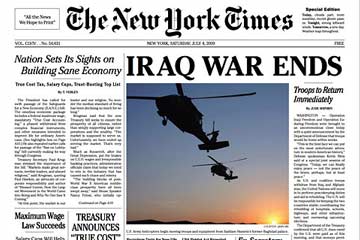 Members of well-known culture jamming organization, The Yes Men, were the pranksters responsible for orchestrating this elaborate hoax. The two leading members of the group include Jacques Servin and Igor Vamos. Vamos is an associate professor at Rensselaer Polytechnic Institute (RPI).

In addition to the shocking headline "Iraq War Ends," the spoof paper included what the (real) New York Times referred to as a "liberal utopia." Other topics headlining on the front page of the paper included:

The parody Times also provided an online edition of the newspaper, located at www.nytimes-se.com. The website appears to be experiencing an overload of traffic after this recently-popular hoax, so loading time is very slow. The Yes Men website is experiencing similar problems.

Though The Yes Men didn't immediately claim credit for the hoax, they issued a statement later in the morning, declaring they were the ones responsible. A quote taken from the statement explains their methods: "In an elaborate operation six months in the planning, 1.2 million papers were printed at six different presses and driven to prearranged pickup locations, where thousands of volunteers stood ready to pass them out on the street."