Confirm business hours in advance.
Home / Things To Do / The Princess and The Frog Review

Review of The Princess and The Frog 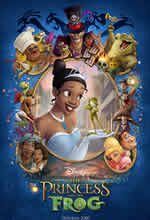 As someone who grew up during the Disney Renaissance, I was excited and hopeful when Disney decided to veer from its course of tween stars and Disney channel movies to its old style of animated films. The Princess and the Frog resembles the movies I watched as a child, with one difference - this movie introduces the first African-American princess in the Disney franchise (voiced by Anika Noni Rose of recent 'Dreamgirls' fame).

After a rocky beginning with controversies surrounding the main character, the movie was released on December 11th.

I saw the film at the cinemas (probably the oldest audience member without an 8-years-old-or-younger escort) and found that while the new movie was not a Lion King-type masterpiece, it definitely deserves its place in Disney's proud tradition.

With a few modern updates (now Prince Charming is far from perfect and Princess is working-class), and a jazzy, unique score by Randy Newman, composer of Toy Story and Monsters Inc., The Princess and the Frog is the kind of film we should have had after Tarzan - the kind of movie that, after a decade of computer-animated and live-action B movies from the franchise, brings back the Disney-loving child we all have inside of us. Rated G, the movie runs for an hour and thirty minutes.