Guide to Albany's Capital Region
Enter Giveaways Advertise
Home  »  Uncategorized  »  Cameron’s Story Bookraiser: A month of events for preemies
Cameron’s birthday is coming up. Like too many preemies, he won’t be able to celebrate. 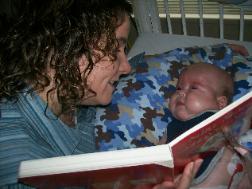 Cameron Jace Quartiers was born on February 16, 2009. He was 16 weeks premature, weighed 530 grams (equivalent to just under 1 lb. 3 oz.), and was just 10.2 inches long. Doctors said Cameron would probably not make it through the delivery, but he did. They said he probably would not survive his first 48 hours, but he did.

Cameron lived for 213 days before passing away on October 20, 2009. During that time, his parents bonded with him by reading. Many parents cannot hold their premature infants, and so they connect with the babies by talking, singing, or reading. Two years ago, his mother Sarah Quartiers founded “Project: Cameron’s Story,” a month-long event aimed at collecting books for premature infants like Cameron. Sarah says she read to Cameron “before I could hold him, before I could touch him.”
Since 2009, Cameron’s Story has collected and donated 2,300 books to Neonatal Intensive Care Units at St. Peter’s, Albany Medical Center and Crouse’s.
Mildred Elley, located at 855 Central Avenue, has been a collection site for two years. “We are so pleased to partner with Project:Cameron’s Story in this amazing effort,” explains Jennifer Butler, Mildred Elley Instructor and bookraising coordinator. “This is Mildred Elley’s second year participating in the book drive. It is just one small way for us to give back to the community and make a difference in the lives of these parents and their precious newborns.”
Books must be brand-new and barely handled because they are intended for sterile environments, the Neonatal Intensive Care Units of hospitals.
You can also donate books by purchasing books between Feb. 16-20, from any participating bookstore: Barnes and Nobles in Saratoga, The Dog Ate My Homework in Glenville, Open Door Bookstore in Schenectady, or Fairview Books in Hudson. Simply tell the cashier that the book is intended for Cameron’s Story.
To learn about other events, click here.