There’s nothing like a good shot of adrenaline. The adrenaline I’m talking about came from attending the press conference for ESPN’s “Friday Night Fights” event, taking place this Friday, May 18th at The Times Union Center. But hey if you saw what I saw, you’d feel the same way.

The event marks the second time in the past three months that Star Boxing CEO Joe Deguardia has put on a boxing show at The Times Union Center. And like last time, he’s giving the fans more than just a good old fashioned slugfest. Last February’s event featured the filming of “The Challenger,” giving fans the option to be extras in a motion picture. This time, he’s bringing reality to the audience. The filming in Albany on Friday will be the pilot episode of a reality show that showcases the best promoters in the country. Deguardia’s program is once again allowing fans to be part of more than just a night of hooks and jabs.

The buildup to the event has been nothing short of stellar. SMG Northeast Regional Director of Live Entertainment Bob Belber kicked things off by giving everyone some background information before stepping off the stand for Joe Deguardia. Although Deguardia did a marvelous job hyping up his event, it was the young, hungry, and charismatic boxers around him that electrified the crowd with excitement.

The card boasts a main event that features the Jr. Welterweight Champion Karim Mayfield defending his title against Raymond Serrano. Adding to the allure of an already much talked about title fight is the fact that both fighters are undefeated, meaning that in addition to the title, personal pride is at stake too. When it came time for them to address one another, everyone was entertained. The champion, Karim Mayfield took the stand thanking his team and the crowd for coming out when he suddenly began rapping, verbally painting a vivid picture of how he was going to punish his opponent. Serrano then took the stand, downplayed the sideshow antics of Mayfield, revealing that he’s not one to talk much whether in person or on Facebook, and would show him what he means when they get in the ring. It looked like a scene out of a movie. The drama, excitement, and suspense spoke volumes.

The undercard consisted of young talent looking to build a name for themselves. They looked nervous but showed poise. They felt larger than life, almost like celebrities. One of the boxers, Vincent Miranda, is currently a resident of Albany. Miranda, a native of Puerto Rico, has spent the last two years living in Albany, competing in the local circuit. Miranda promised the crowd at the Times Union Center that he would put Albany on the map, resulting in a thunderous show of applause for the young man.

Another very promising fight on the card features Jason Escalera, an undefeated young man, with an accent identical to the infamous Tony Montana, aka “Scarface,” taking on Nick “Machine Gun” Brinson. Both fighters spoke of their desire to give the fans the best show possible, showing humility and respect for one another, proving that boxers can and do indeed have a professional side too. 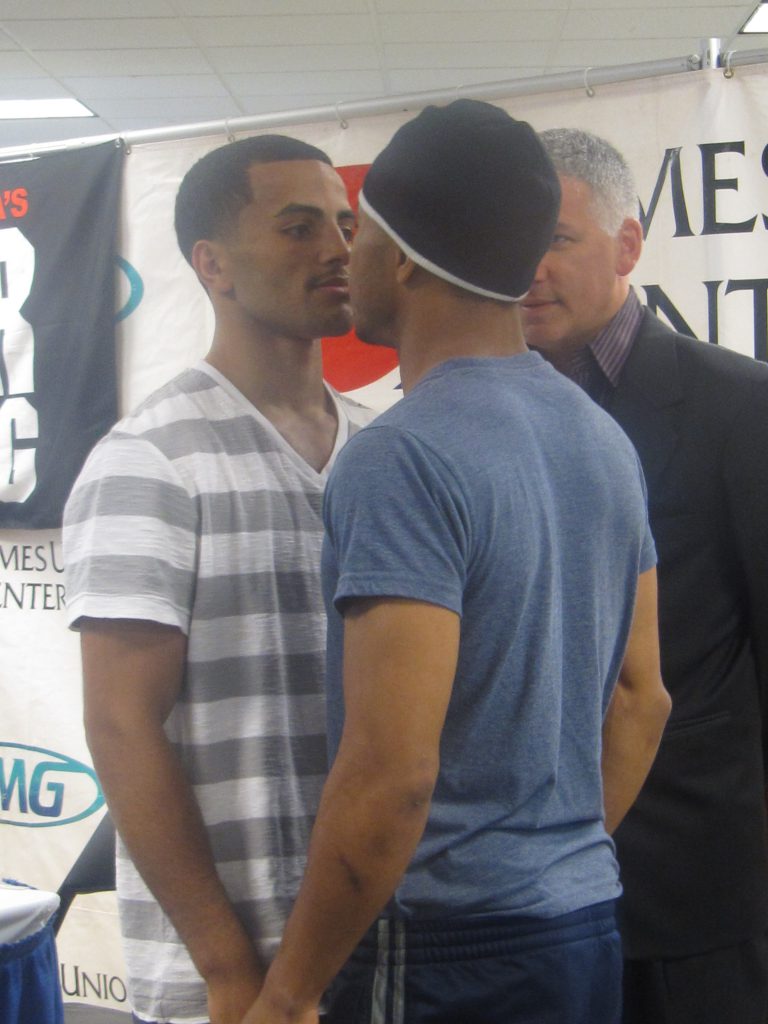 The press conference ended with each boxer and their opponent in a traditional stare-down, surrounded by flashing cameras. This is where things almost got out of hand. The opposing entourages began exchanging insults, almost resulting in a scuffle. You could see the adrenaline on the face of all of the youngsters, in fact Mayfield and Serrano looked like they were going to war. You could see beads of sweat drip down the faces of the main eventers, their hands were balled up in fists, and the tension was so intense that it could be cut with a butter knife.

It resembled stuff straight out of Hollywood but this was unfiltered, explosive, and REAL. It was that rare moment where you have no control over what could happen, perfectly setting the tone for Friday night’s event.

I went to the press conference on an assignment, unfazed by the sport but when I left, I was completely sucked in and couldn’t wait to see the competitors give it all they got.

Friday Night Fights takes place on Friday May 18th, 2012 at 9:00 PM live from the Times Union Center, located at 51 South Pearl Street. Tickets can be purchased at Ticketmaster, participating Walmart locations, and the Times Union Center box office; over the phone by calling 518.487.2000, and online by visiting www.timesunioncenter-albany.com.