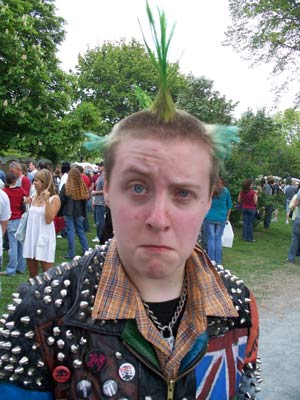 I am a 52-year-old woman who raised four boys, so I've learned by now boys will do anything for attention. But I saw this one young man at the Tulip Festival this year who had, I'm not exaggerating, a 12-inch green mohawk! I've got pictures to prove it, which are attached. Though I was quite fascinated by the unusual dying of the hair, and all that metal and paint all over his leather jacket I couldn't help but think, "How bad all that is for the body."

I run a monthly newsletter to keep our family informed of all the latest happenings among us, so I just had to ask him if I could snap a shot of his hairdo. I knew no one would believe it otherwise! I asked the lad if he had a purpose attached to it all, like the tennant in the red dress who agreed with his friends to dress in red and run through the town just for effect.And he said no, he just enjoys individuality and doing his own thing.I asked if he minded me getting his picture for our newspaper, and he said no problem and posed for two.

After the mini photo shoot, he asked me, (it seemed somewhat hopingly), if he would be on "Flikr" which sounded like a publicity site for getting attention.I told him no, sorry, it's just a family paper.As I thanked him, he nodded his head and off we went. That was his way of enjoying the Tulip Festival, I guess.

« Return to Tell Us All About It!