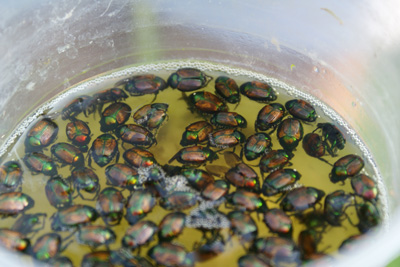 Maybe this will help someone, but I found it a little creepy. Apparently my mother is the authority on how to kill Japanese beetles.

You've probably noticed that Japanese beetles are everywhere this year. I've noticed them mostly in my swimming pool... dead, of course. But these things are a nightmare when they get stuck in your hair or latched to your clothes. I can't stand them.

Well, I stopped by my mother's house the other day, and she asked if we had a problem with them destroying our plants this year. Then she proceeded to tell me how she 'takes care of them.'

She went to the garden shed and grabbed a plastic Tupperware container with dozens of floating dead Japanese beetles she had killed.

"You just sneak up under them," she said, "then you get them in the water and they drown."

She said this all with a huge, evil smile on her face. Apparently, she really hates Japanese beetles. You can imagine how thrilled I was to see all those floating dead beetles... ick! So I had to snap a photo of them, which I will send along too if you need proof!

« Return to Tell Us All About It!