Why You Should Be Buying Your Kids Clothes & Much More at B. Lodge & Co.

Who supplies the coats for the annual Cash for Coats Drive? Who works with local schools to get uniforms at reduced prices? Who's so invested in Albany that they were the first to get the ball rolling with apartments downtown?

The answer? The same community-focused family behind the oldest store in Albany, which is where you'll want to go for your next clothes shopping trip. 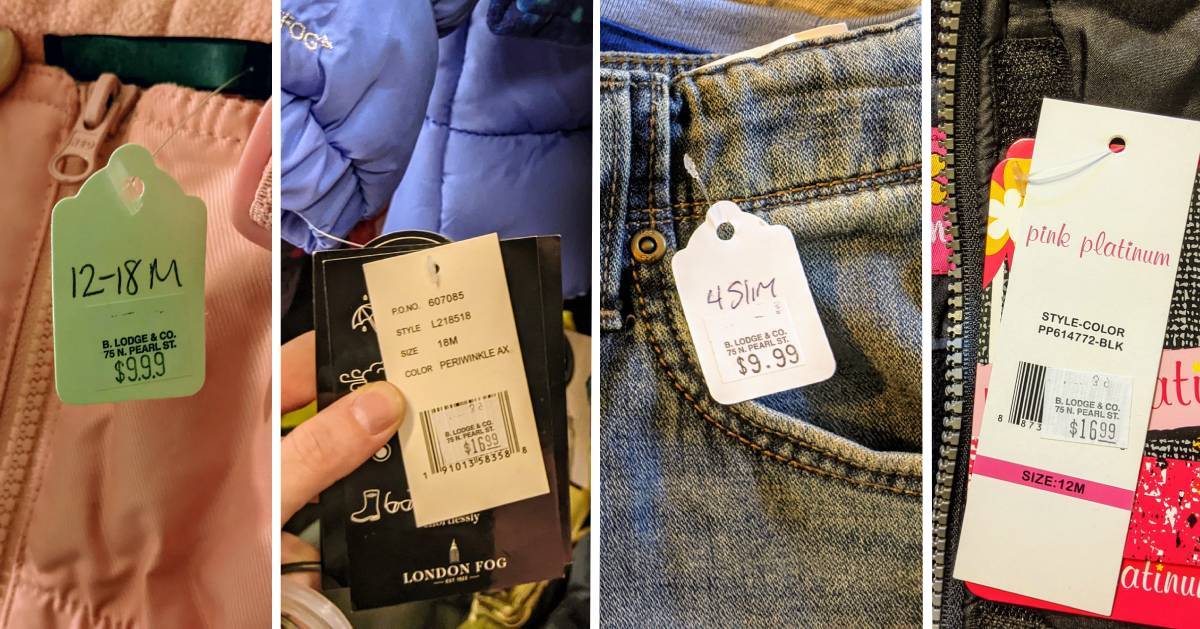 You may have walked by B. Lodge & Co. at 75 North Pearl Street on your way to dinner at the Pearl Street Pub, or maybe you've thrown an axe or two at their neighbor's business, Far Shot Albany. However, if you've never ducked inside this unassuming store on Albany's main downtown strip, here's what you're missing.

Toddler tee-shirts, $3.99. Toddler coats, $16.99. Kids gloves, $1.19. Snowpants for infants and toddlers, $9.99. Character backpacks, $7.99 to $12.99. And we're talking brands like London Fog, Polar Extreme, and Pink Platinum. Despite the consignment sale-like prices, these are brand new clothes and accessories. And, they don't just carry items for kids. 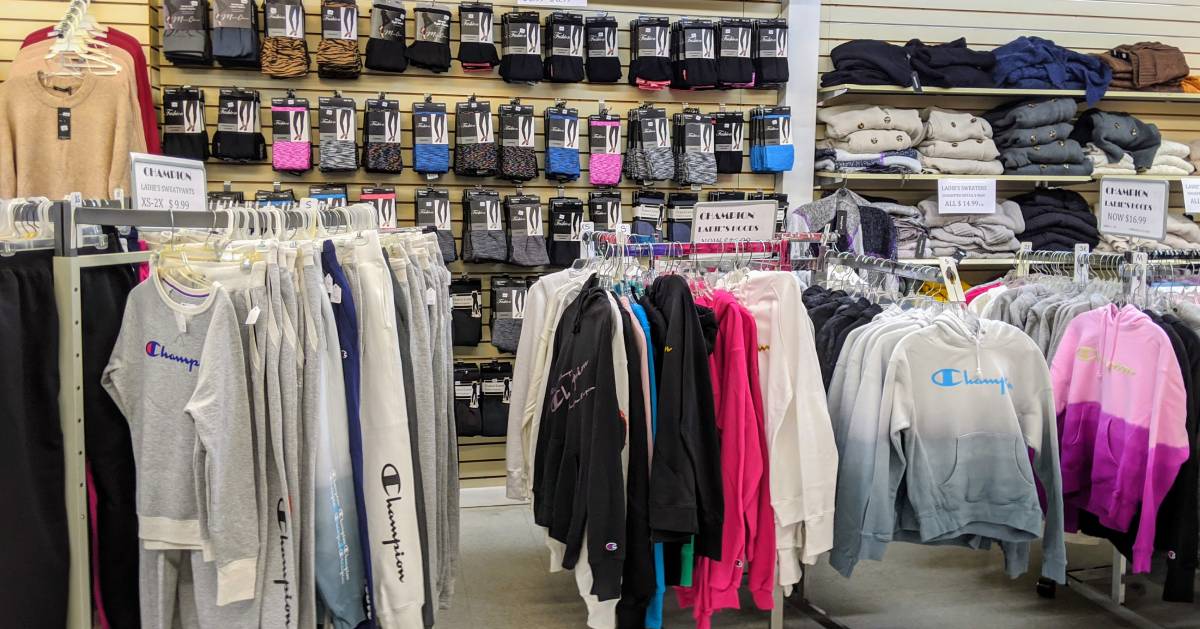 You'll find flannel shirts for men at $10.99, leggings for women at $5.99, bras from $4.99 to $7.99, and the list goes on. The prices speak for themselves! They're also a treasure trove of Champion clothing, which you'll see from a quick Google search is once again a super popular brand as "vintage" 80s and 90s fashion creeps back into style.

"We've been a loyal customer to Champion, and now that they're doing extremely well they're continuing to provide for us," Mark Yonally told us; Mark co-owns the store with his sister Sharon Freddoso and father Jack Yonally. "We basically undercut the prices. We're kind of like a Champion outlet." 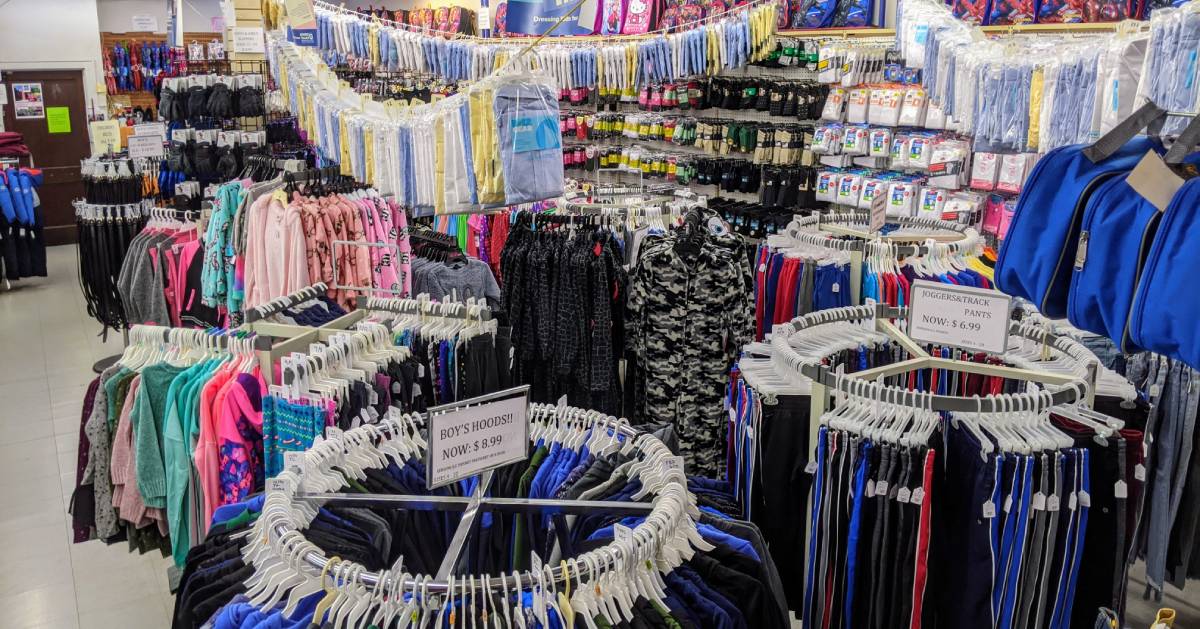 From socks to underwear to belts to winter wear, it's all there at ultra-reasonable prices. "We pride ourselves on kids clothes," Mark said. "A lot of our customers are struggling, they don't have money like they do when times are stronger. And kids outgrow their clothes so fast. A $5 long-sleeve tee-shirt really means something to parents."

B. Lodge & Co. had been forced to shut its doors temporarily during the beginning of the shutdown, but those who know and love the store returned. "When we re-opened in mid-June all the customers came back," Jack told us. "They're very loyal. A lot of little stores aren't going to make it, but we are."

Tell Your Doctor & Nurse Friends About Their Sensational Scrubs (And See What Their Other Niche Product Is!) 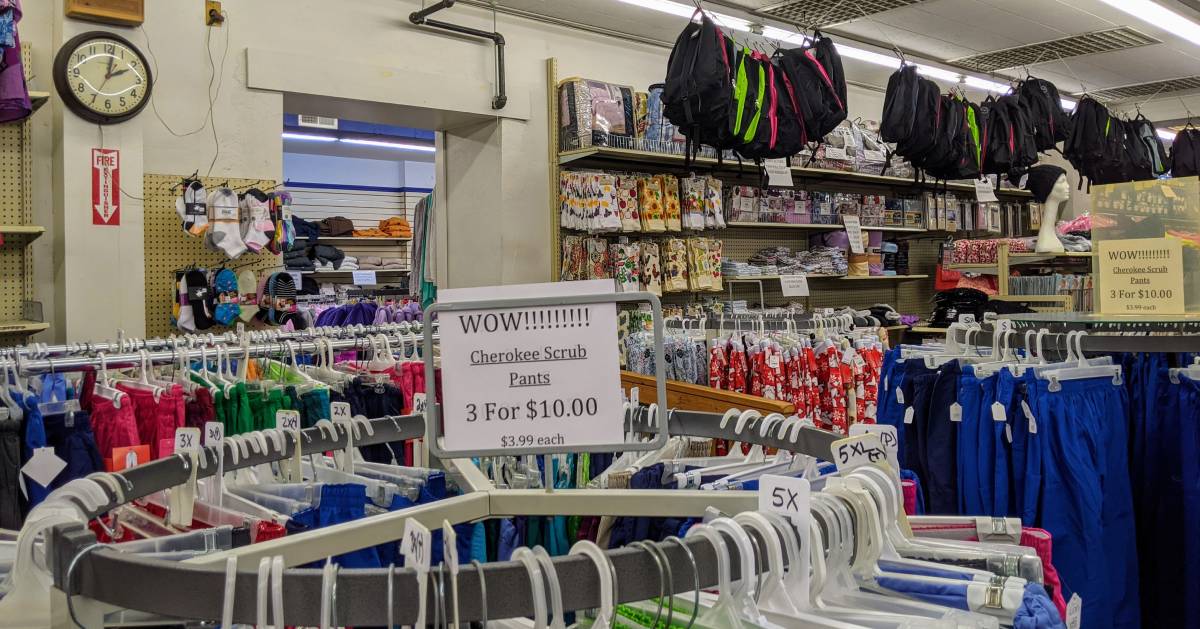 Although the kids clothes make up a huge component of the store, the two products B. Lodge & Co. are really known for, that they have been supplying for the region since the store got its start in 1867, are medical scrubs and school uniforms. 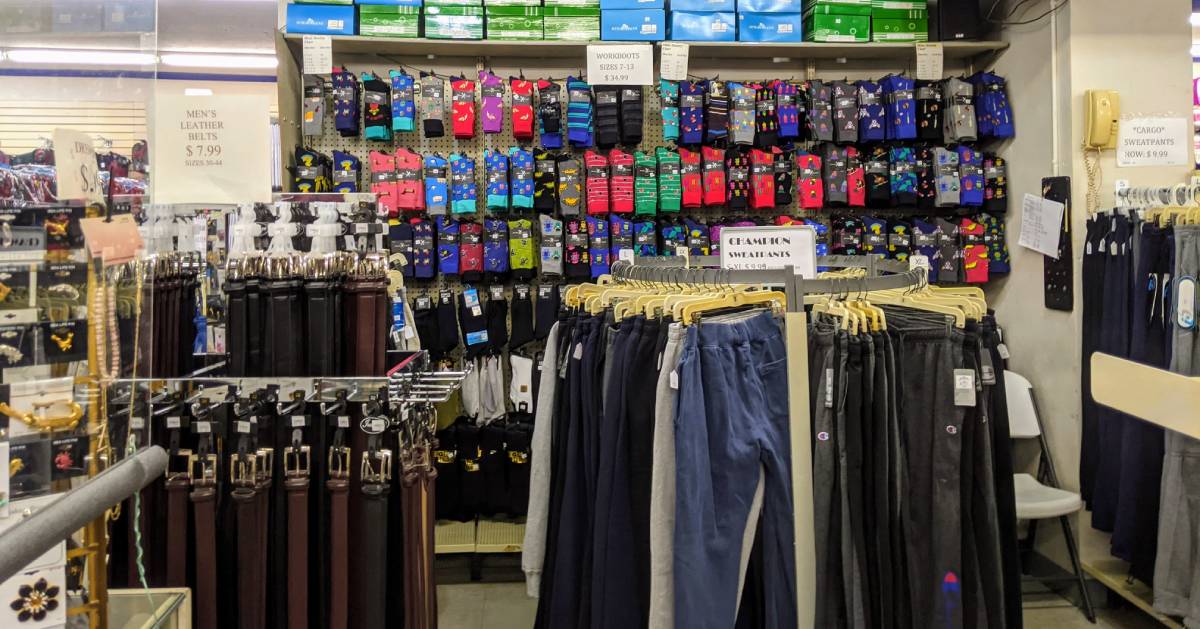 B. Lodge & Co. was first established in 1867 by Barrington Lodge and his two sons Charles and William, making this the oldest store in Albany. The Lodges sold the business in 1960, and Jack Yonally and his wife Elaine bought it in 1995. It's remained in the family ever since.

To say that the Yonallys have strong ties to the community would be a major understatement. They work with numerous organizations, schools, and more in the region, including MVP, CAP COM, City Mission, Albany County, Rensselaer County, SEFCU, and others. 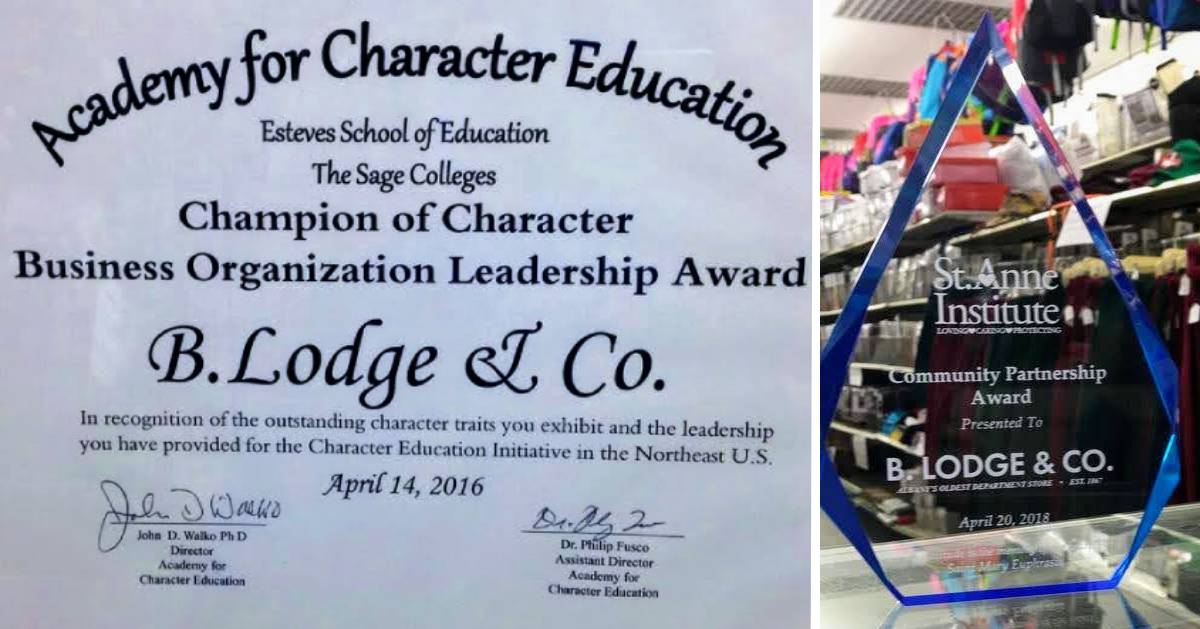 "It all started with Jerry Jennings," Jack told us in regard to how B. Lodge & Co. provides all the coats for News10 ABC's annual Coats for Kids Drive. "He told me he saw a kid going to school with no coat on, and what can we do about that? We've provided over 10,000 seriously discounted coats over the years to different schools. And not used coats and clothes, but brand new."

The Yonallys bring businesses and residents to downtown Albany, and have been doing so for decades. In 2001, they put the first apartments in downtown Albany. In 2010, they bought property on Columbia Street where there's now a florist, a deli, a barber (who has been there for 16 years), a physical therapist, and more.

"If you set your rent at a nominal fee, they won't move out," Jack said. "They add to the ambience." "We believe in a community," Mark added. "Each shop brings something to downtown. We feed off each other."

What to Know & Where to Go When You're Ready to Shop 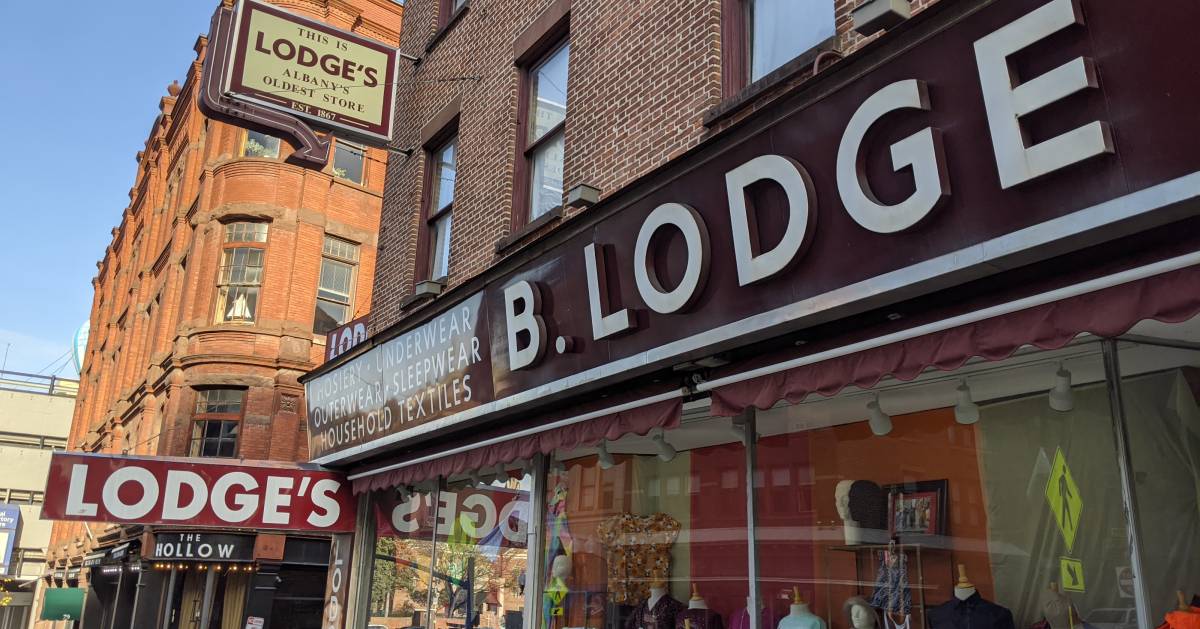 Now you know where to go for the best prices and that feel-good vibe you get when you support a local store (whose owners in turn support the entire community).

B. Lodge & Co. is open Monday through Saturday, 11am to 5:25pm. (Yes, that's 5:25pm, so that employees who take the bus are able to make the 5:30pm). Find the store at 75 North Pearl Street and street parking is available close by on Clinton Avenue near the Olde English Downtown Dog Park and on other side streets, or the Riverfront Parking Garage is also close by. Street parking is free on Saturdays!