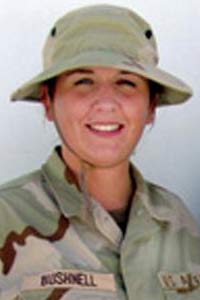 Starting on July 16, five U.S. military veterans will take a 4,200 mile journey across the nation on bicycles.

Traveling from Aberdeen, Wash. to Washington, D.C. the veterans will be part of the inaugural Long Road Home Project.

One of the veterans taking part in this ride is Colleen Bushnell, a public affairs specialist for the military and a resident of Troy. (pictured above)

Bushnell first started serving in the military in 1997 at the age of 24. Throughout the years, she handled community relations for different bases, taught basic journalism and was the Pentagon appointed project officer for a six-hour documentary series called Rescue Warriors on National Geographic.

After being medically discharged in 2006, Bushnell’s own experiences inspired her to help others in her shoes.

“I was disconnected from my family and friends back home because I’d been in service so long,” said Bushnell about her experience. “Since then, I’ve come to meet, talk to and assist many women veterans who’ve experienced the same fate.”

Currently, Bushnell works as a volunteer advocacy and outreach board member for the Washington, D.C. non-profit organization called Protect our Defenders. She said she networks with advocates nationwide to provide peer-to-peer support to the newest survivors of military sexual trauma.

Bushnell’s work will be put on hold, though, once July 16 comes around.

“I’m very excited to meet people across the nation who care about veterans,” Bushnell said about the upcoming ride.

Along with spreading awareness, Bushnell and her team will be stopping by a few VA hospitals to encourage the patients receiving treatments not to give up.

To prepare for their trip, Bushnell and the other veterans are raising funds to cover the basics of the ride.

“We will be camping and taking donations of lodging and supplies along the way,” said Bushnell.

Although they haven’t reached their fundraising goal, Bushnell said there has been a large outpouring of support, and more than forty homecoming events have been planned for the veterans throughout the country.

The support throughout the country isn’t the only support Bushnell has been getting, though.

Bushnell said support from her hometown of Troy, the county government and hometown veterans have been there to encourage her.

“I come from a place of amazing people who inspire me to put myself out there for those who cannot,” said Bushnell.

Bushnell hopes her story and part in the bike ride will bring about awareness and community support for when veterans come home from the war.

“I hope people gain a better understanding of the different faces of veterans that make up our war-fighting machine,” she said. “All of us chose to serve on a volunteer basis, and we deserve adequate resources to recover and reintegrate into society.”

Will you be supporting Colleen on her ride?