The History of the Erie Canal: NY State's Engineering Marvel

In the early 19th century, Albany, NY was a key part of one of our country's greatest engineering marvels - the Erie Canal. Constructed from 1817-1825, this historic canal not only transformed NY State into a prosperous region, but it led to significant developments throughout other areas of the United States. 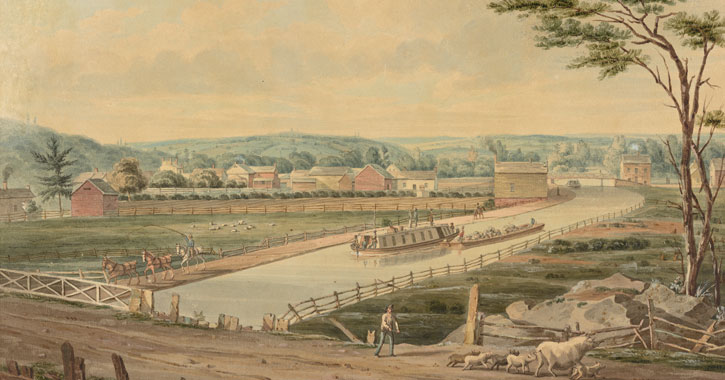 A Better Mode of Transportation

Beginning in the years following the Revolutionary War, the U.S. began to expand west and establish settlements beyond the Appalachian Mountains. These areas featured fertile valleys and a large amount of natural resources, which helped the new towns and cities grow.

At the same time, one of the biggest issues the country faced was a disconnect between the East and West. For the most part, trade was limited to eastern coastal cities because there wasn't an efficient mode of transportation. Instead of roads, explorers sought a different and better way to conduct trade across the country.

The answer would come from a merchant named Jesse Hawley. Hawley envisioned a canal that would begin in Buffalo, NY on Lake Erie and stretch all the way to Albany, NY. This would allow goods to ship from NYC, travel up the Hudson River, move along the canal, and then be delivered to areas in the Great Lakes Region, and vice versa.

The Development of Clinton's Ditch 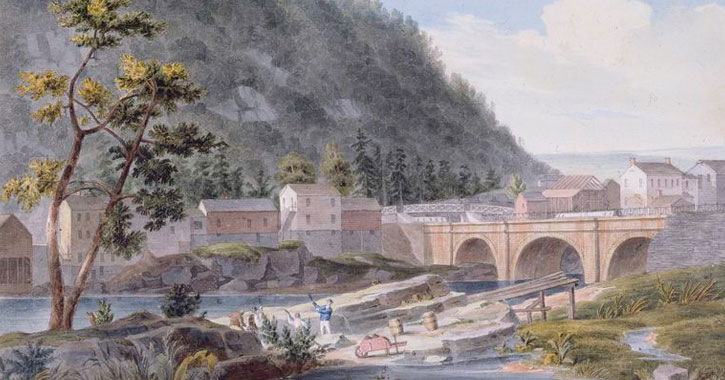 In a series of essays, Hawley wrote about his idea for a canal that traveled west-east across NY State. Local State Assemblyman Joshua Forman read these essays and submitted legislation to conduct a feasibility study for the canal in 1808. His proposal was denied, but two others, Thomas Eddy and State Senator Jonas Platt, presented the project to influential NYC Mayor Dewitt Clinton.

Clinton became a strong supporter of the canal plan, and he was successful in creating a Canal Commission to survey the route. Through the War of 1812, Clinton pushed for the development of the canal, and in 1817, the NY State Legislature approved a $7 million bill to construct the 363-mile long waterway.

For Clinton, the canal project wasn't just about building a new trade system, it also helped him improve his political position. He aimed to become Governor of NY State, and while his opponents attacked him by referring to the canal as Clinton's Ditch, his success in launching the project propelled him to the Governor's office later that year.

Creation of the Erie Canal

One of the project's major hurdles was its own engineers and contractors. Many had little experience building canals and locks, so they had to learn as they worked.

About 9,000 people contributed to the development of the Erie Canal. While some were U.S.-born, a lot of the work was done by Irish immigrants using primitive tools. Workers were paid about $10 a month, and barrels of whiskey were placed along the route as a form of encouragement.

Over the course of 8 years, these workers cut down trees, moved stumps, blasted away rocks, and dug a canal route. Through a combination of manpower (and animal power), the groundbreaking Erie Canal was finished on October 26, 1825.

A Period of Prosperity 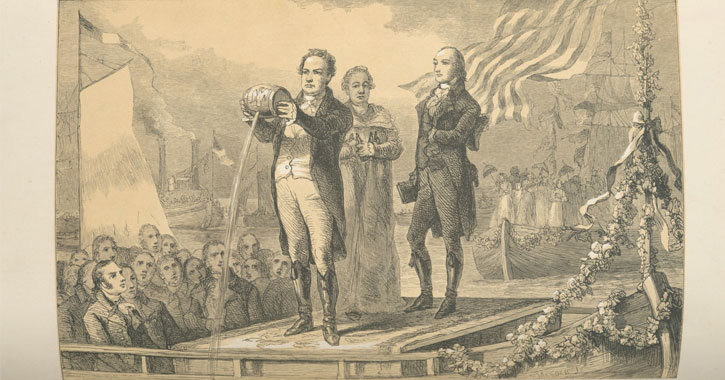 Upon the completion of the Erie Canal, Governor Dewitt Clinton kicked off a "Great Celebration." Beginning in Buffalo, cannons fired off along the length of the canal to Albany and down the Hudson River. Then, the cannon fire was returned all the way back to Buffalo.

As the cannons went off, Clinton took a flotilla of boats from Buffalo to NYC to celebrate the momentous occasion.

From the moment the Erie Canal opened for travel, it was an immediate success. There was an explosion of trade as natural resources were transported from one end of the canal to the other in record time. Settlers were encouraged to travel west around Buffalo and the Great Lakes Region and contribute to the growing communities.

Supplies flowed from east to west, and just 15 years after the canal opened, NYC became the busiest port in the country. In fact, traffic increased so much that the canal had to be enlarged multiple times.

Into the 20th Century & Beyond 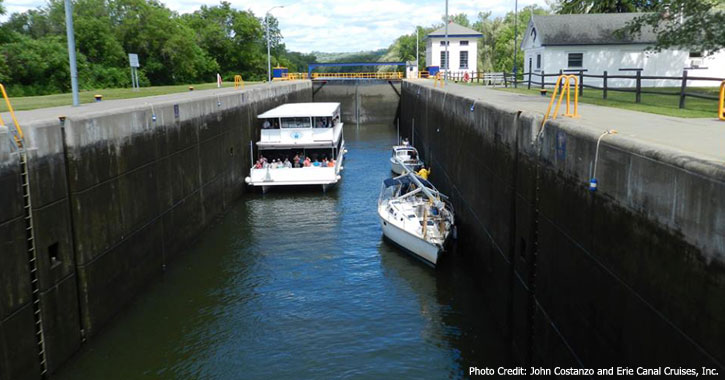 By 1903, the popularity of canal transportation had grown to the point that NY State decided to construct the New York State Barge Canal, a 525-mile canal system that connected existing canals - the Erie, the Oswego, the Champlain, and the Cayuga-Seneca Canals. The massive canal system was completed in 1918.

In the first half of the 20th century, the Erie and other canals faced competition from railroads, but expansions helped them remain an important part of the state's trade system. However, canal commercial traffic began to decline in the latter half of the century as truck and air travel took over as the main modes of transportation for goods.

Commercial traffic on the Erie Canal has significantly fallen since then, but the canal still accommodates heavy barges and other boats. Today in the 21st century, it is popularly used by recreational boaters who are able to enjoy traveling along the historic trade route.

« Back to the Albany History Guide

Unless noted, photos from the New York Public Library