Confirm business hours in advance.
Home / Things To Do / Book Of Eli Review

Review Of The Book Of Eli 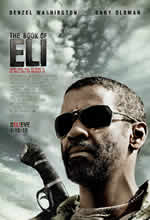 The Book Of Eli has a simple yet serious, clear-cut storyline - a basic good versus evil plot. The film features amazing cinematography of a desolate post-apocolyptic civilization featuring Denzel Washington as a strong main character. There were scenes of gripping suspense and peril as well as scenes of quiet, thoughtful reflection.

In my opinion, Denzel really made the movie. In many ways, it reminded me of Will Smith's role in I Am Legend. Overall, a good movie that's worth seeing at least once.

The story centers around a latter-day-prophet type, Eli (Denzel Washington), who has been traveling west for 30 years through a land of ruin since "The Flash," after which no one has obviously even attempted to begin rebuilding. Eli's mission is to start civilization anew with the last copy of the most powerful book on Earth - The Bible. He is guided by a voice inside him.

To complicate Eli's mission, however, is Carnegie (Gary Oldman). Recognizing the power Eli's book would yield, Carnegie also seeks the Bible to use for his own evil devices. Carnegie has a sort of dictatorship over this desolate town, and when Eli's journey brings him there, he tries to get the Bible first by trying to befriend Eli, then by trying to kill him. The opposition plays out in a series of interesting and often violent confrontations.

In the end, good (predictably) prevails, but there is a subtle but interesting twist that may make you want to re-watch the movie all over again.