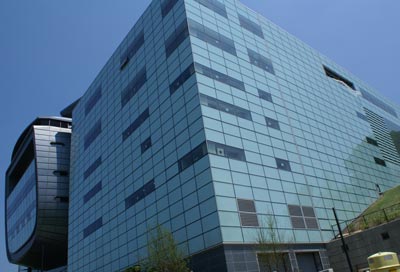 EMPAC is a state of the art venue where science, art and technology fuse and influence each other by all being housed under the same roof.

The building sits on the campus of Rensselaer Polytechnic Institute (RPI). Its purpose is to draw lasting connections between human senses, perception and create meaning in an environment with ever changing technology. EMPAC is unique in its technical framework that hosts both artists and researchers to present new works and present events and lectures.

EMPAC premiered a wide variety of events in its inaugural month. From live classical music and interactive multimedia sessions to discussions with eminent researchers from the science and engineering communities. It also played host to events that reflected interests of the RPI student body.

The 220,000 square-foot building holds four main venues as well as many smaller studios and lab space. All can be used both independently and in conjunction with other spaces. This allows student gatherings, event presentations and research sessions to all take place at the same time.

The cafe and multi-floored lobby are very popular amongst RPI students as a social space. Located next to a 90-foot- high glass wall filled with heated fluid to prevent condensation, a clear view of Troy is available throughout the day and night. Student performance groups are able to use Studio Beta to rehearse and perform.

Almost anything is possible on EMPAC's Theater's stage. Computer controlled rigging allows people and props to be flown around. The theater incorporates several technologies that could previously only be found in the most advanced stage settings. The space is extremely quiet and the low stage allows for a very intimate theater experience.

The live music venue of the EMPAC is a brilliant combination of comfort, acoustics and refined materials. Air rises from under the seats instead of from loud ceiling fans, high definition video can be projected onto a 56' wide screen and a fabric ceiling takes its acoustics to the next level.

These studios are typically used to become "multi-modal environments" where digital technology can be demonstrated to its fullest. Control rooms are located outside and above the studios so the space can be used solely for human and technological interactions. Light and image projection can also be shown anywhere in the studios.