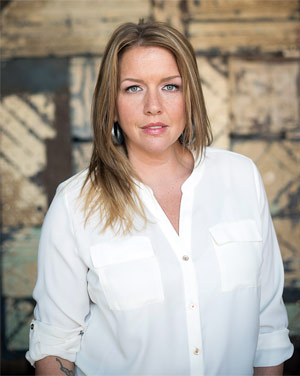 ALBANY NY – On April 7, 2010, local singer / songwriter and Albany native Erin Harkes was pulled from the audience on Late Night with Jimmy Fallon for a nationally televised segment called, "Battle of the Instant Bands."

For the segment, two impromptu bands comprised of audience members are given about 20 minutes to write, practice and perform a song on air.

The bands are formed of musicians from the audience who have never worked together before. They come up with a band name, album cover and song backstage before the show.

Harkes describes the experience as a "truly random and wonderful opportunity."

Harkes notes that her mother and she arrived over an hour early for their 4:15 entry to the show. While waiting in line for entry, a producer was scouring the crowd for musicians. Harkes mentioned that she played guitar, but that she thought herself a better singer. The producer then pulled her aside for a mini audition.

"After some tense moments of uncertainty, and three notes on a run-through of Nirvana's 'Smells Like Teen Spirit,' I joined up with a guitarist, a bassist and drummer," said Harkes. "The 'Fallon Angels' were formed with a wink and a nod to the host."

The newly formed impromptu band threw together a song called "Free Jimmy." Harkes penned the lyrics, and the band laid down a ripping 30 seconds of rock. Once on set, and after a few laughs with host Jimmy Fallon (who gave props to Albany), The Fallon Angels took the stage. With Harkes' vocals backed by the bands' excellent musicians, they bested the competition: 'The Battle Axes.'

"I think we did a better job than the other band, and we connected with Jimmy more," Harkes said. "It also helped that I'm from Albany and he has his St. Rose connection. If you look at the message board, I think people felt my voice had something to do with it, which is very flattering."

For winning, Harkes and the rest of the 'Fallon Angels' won some great musical gear, a generous gift card and a memory they will never forget. Not to mention the free publicity of being on national television!

After winning "Battle of the Instant Bands" on Late Night, Harkes has plans to compete in SPAC's first ever Battle of the Bands Competition in Saratoga Springs on May 21, 2010.