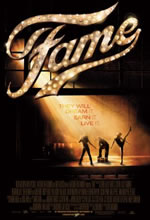 The recent release of "Fame" would seem to be a sure-fire hit, riding on the success of the new rise of movie-musicals like "Sweeney Todd" and "Mamma Mia". The movie is also appearing soon after the high ratings of the musical TV series "Glee" and dance shows "Dancing with the Stars" and "So You Think You Can Dance". Having once been a movie and TV series itself, the "Fame" remake seemed like it would be an instant hit. Unfortunately, the hype and precedence took a turn for the worse when the film failed to deliver.

The immortal word "Fame" would first appear in 1980 as a film chronicling four years at a performing arts specialized high school in New York City, followed by a TV series exploring the same plotline in 1984 and an American Idol-esque show in 2003 (Debbie Allen appearing in all of these, including the new film). Like its 1980 parent, "Fame" sometimes lost its many characters among their several plots. Unlike the former version, the new film pared down and avoided the more controversial topics, making the movie an entertaining song-and-dance unlike its generation-defining precedent. While far from living up to the first film and series, "Fame" is still a showcase of young talent, with a groovy soundtrack (including an updated version of the title song), some pragmatic doses of the real world of aspiring artists, and musical fun.