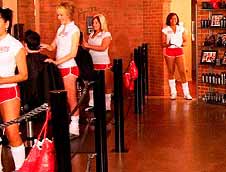 Albany, NY -- When you hear they are also known by the media as the "Hooters of Haircutting" - you know this salon is not like any other. The Knockouts chain has a boxing and sports theme, and all the hair dressers that work there are dressed in skimpy "boxing" outfits to follow this theme. The salon specializes in "male treatment" - offering beverages, leather chairs, and sports on TV.

Knockouts is a hair salon chain and will being opening right outside of Albany, on Wolf Road. Based in Texas, this is the first Knockout Salon in New York state. Tom Friday founded the chain in 2002 and though admits to only hiring attractive female hairdressers, he also makes it clear they must be able to give a good hair-cut, as well.

A typical haircut at Knockouts will cost $25 (not including tip). This is called the "heavyweight" haircut and features two shampoos (one before the cut, and one after), two massages and a haircut.

This is definitely special treatment. But if it is appropriate or not for the Capital Region, that is up to you. Find more Albany spas and salons, and learn more about another controversial salon opening in Saratoga, Swagger.